Warwick Farm-based Robert Quinn has made a dream start to his training career with Vinery sires All Too Hard and Press Statement.

They have combined to win three races in the last ten days with Sally Pops (All Too Hard) doubling up at Bathurst and Wagga before Marcher Sur l’Eau (Press Statement) bolted in at Newcastle on Tuesday.

Marcher Sur l’Eau made everyone sit up and take notice after trouncing a competitive field of maidens by five lengths on debut in the Red Funnel Hcp (1350m).  And stopping the clock at 1:20.87s made the win worth a second glance.

He settled out the back for Koby Jennings and then exploded in the straight to put a big field away with a turn of foot termed ‘exciting’ by the course caller.  “He’s pulled up well,” Quinn reported on Wednesday morning.  “He had been going well at the trials and was pretty forward first-up.”

Marcher Sur l’Eau is the latest Press Statement to show the potential that Quinn believes will be in full bloom later this season.  “I expected a big run but nothing like that!” the Irish-born trainer admitted.  “Koby said he relaxed and got into a rhythm after stepping away slowly.  He’s so laidback but when they hooked out in the straight, it was over in a heartbeat.  He just went straight past them.”

Press Statement sired Marcher Sur l’Eau from Irish-bred mare Gipsy Countess (Sadler’s Wells) who won over 2400m at Tipperary for legendary horseman Jim Bolger.  Her yearling filly from the first crop of Russian Revolution has been catalogued as Lot 340 for the Gold Coast Magic Millions Sale in January.

The filly is being offered by Vinery as agent for John Stuart Investments breeder Brian Backshall.  Russian Revolution was also sold by Vinery on behalf of Backshall for $320,000 at the 2015 Inglis Easter Yearling Sale and he was good enough to win a Oakleigh Plate Gr.1 at Caulfield.

Gipsy Countess is now owned by Queensland breeder Laurelle Owen.  The mare foaled a chestnut filly by Headwater in August and was scanned positive to him again earlier this month.

Marcher Sur l’Eau, which is French for ‘Walk On Water’, carried the same colours registered by Quinn’s parents back home in Co. Kilkenny and he grew up just a few kms from Bolger.

“That made the win extra special.  Mum & Dad have been racing for over 40 years and my brother worked for Mr Bolger,” he recalled.  “I’ve been out here for nine years and have been buying and selling and educating the young ones.  The best I broke-in was Castelvecchio.”

Quinn took out a training license earlier this year and Sally Pops was his first winner at Bathurst on November 14.  “She’s a 3yo filly by All Too Hard and I race her with an old school friend Eddie Cunningham.  We also have a Dundeel broodmare Our Fun with another mate Aidan Kelly and she has just been covered by All Too Hard.

“We’ve enjoyed the last two weeks and Marcher Sur l’Eau was very impressive yesterday.  He will keep improving and get out to a mile at least.  But there’s no rush.  The autumn will see him mature into a very nice horse.” 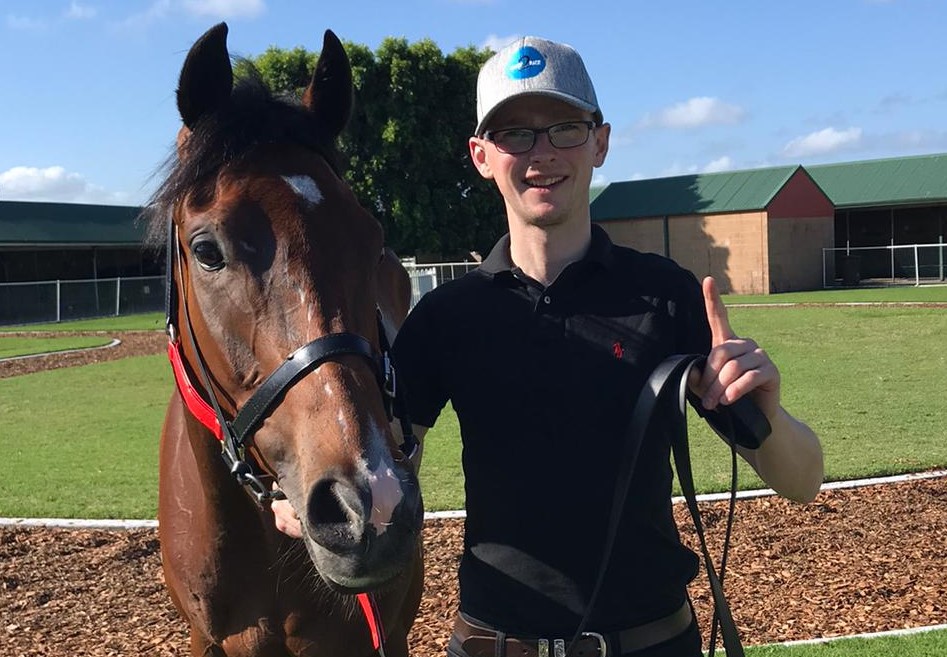