Irish-based Equiano sprinter Blood Moon is ready for another black-type contest after winning the feature event at Fairyhouse on Thursday.

Blood Moon (pictured in blinkers) disputed the lead with Sheikh Hamdan’s colt Munshid and then dropped the favourite for an authoritative victory in the Coral Rated Race (1200m).  He was down in class after a respectable sixth behind Group 1 colt Washington DC in the LR Coolmore Stud Power Stakes at Navan last month.

“He’s grown into a fine big horse but is as lazy as sin at home,” trainer Ger Lyons revealed.  “He was in front plenty long enough and then capitalised.  He can win a Listed race as long as the big boys stay away.”

Blood Moon (3g Equiano – First Eclipse by Fayruz) had beaten Washington DC on debut at Dundalk in April last year and was Group 3 placed in the Curragh Stakes in August.  “I’ve always thought he was a stakes horse,” Lyons said.  “But he was rushing his races and we had to teach him to go through the gears.”

He cost Lyons 28,000 euros (AUD 44,605) at the 2014 Tattersalls Ireland September yearling sale and is a half-brother to Listed winner Agony And Ecstasy (Captain Rio).

Equiano (Fr) shuttles from Newsells Park to Swettenham Stud and is developing into a high-volume winner-getter in both hemispheres.  He leads all third-season sires in Great Britain this year with the winners of 22 races from Arcano (20) and Zebedee (19).

He is also a Top 10 sire in the 3YO division in Australia with a 56% winning strike-rate and Brimarvi Equiada is favourite to make it four in a row in Race 2 at Morphettville on Saturday.

Equiano colt Sky Muster added to his sire’s tally of 2YO winners with a debut victory at Geelong on Tuesday.  Trained by Team Hawkes for Top End pastoralist Viv Oldfield, he was a $100,000 buy from Swettenham’s consignment at the 2015 Inglis Melbourne Premier Sale.

Jockey Darren Gauci positioned him on the pace in the Roderick Insurance Brokers Maiden (1000m) and then scooted clear at the top of the straight.  “He jumped a bit awkwardly but within a couple of strides was sitting outside the leader,” Gauci reported.  “He started looking around when he got to the front and it felt like he wants further.”

Sky Muster is bred to get over more ground.  His dam Lanesborough (Redoute’s Choice) is a three-quarter sister to Swettenham’s G1 Victoria Derby winner Blackfriars. 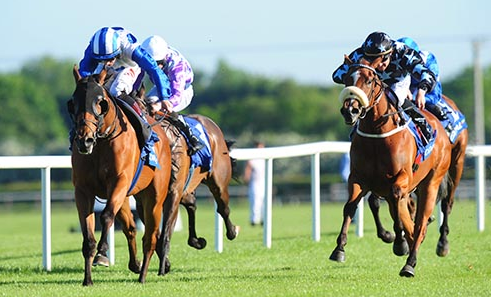