The good looking daughter of Vinery sire Myboycharlie was purchased by Widden Stud from Triple Crown Syndications.  It was the second time Peggy Jean had paraded on the Gold Coast – she was originally purchased for $25,000 at the 2012 National Weanling Sale when offered by Donnybrook Estates.

Peggy Jean won the G1 Sydney Sires’ Produce Stakes at Randwick and was sold in foal to I Am Invincible.  “She’s just gorgeous and has a lovely, deep pedigree,” Widden Stud’s Antony Thompson said.  “She’s one of the mares of the sale and Sebring looks the obvious choice for her this year.”

Surf Poet (Charge Forward) was next best on Day 2 when targeted by Emirates Park for $700,000.  She’s positive to Snitzel and that foal is a three quarter relation to star mare Sweet Idea.

Yosei (I Am Invincible) was another Group 1 mare to attracted plenty of interest when presented by Morning Rise Stud.  She will stay in Victoria after being snapped up with a $580,000 bid from David O’Callaghan on behalf of Sun Bloodstock.

Thursday’s strong clearance rate at the National Broodmare Sale helped boost the overall sale gross after two days to almost $52 million at a clearance rate of 84%.  “It’s powering along at every level,” Magic Millions managing director Vin Cox said.  “Our gross has risen almost $10 million and the average is up 15% to $138,000.  By any standard, that’s a very, very good sale.” 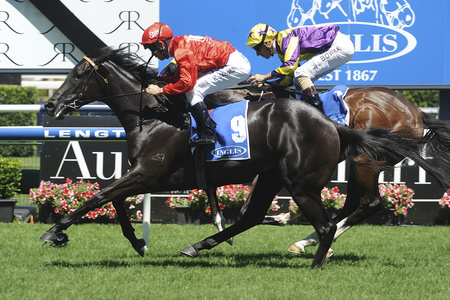