More Than Ready’s affinity with Saratoga went to another level on Wednesday when his colt Catholic Boy burst out of a pocket to claim the With Anticipation Stakes-Gr.3.

Despite an impressive 2yo debut victory at Gulfstream Park last month, Catholic Boy was allowed to go out at $12 in a wide-open field headed by Todd Pletcher’s colt Earth who was coming off a black-type placing in the Tyro Stakes.

Earth (Orb) led the field into the home turn but was a sitting shot when Catholic Boy emerged from a ruck at the furlong.  “I had a lot of horse under me and I was trying to find my way out,” jockey Manny Franco explained.  “I had to wait a little longer than I wanted, but when the hole opened, I had a lot of horse left.”

Catholic Boy is the 175th stakes winner by More Than Ready.  He is trained by Jonathan Thomas for owner Robert LaPenta and his dam Song of Bernadette (Bernardini) is a half-sister to Arlington stakes winner Return To Paradise.

“Mr LaPenta is a New Yorker and Saratoga is my second home, so being able to come up here was important,” Thomas said.  “I’m impressed with him knowing he didn’t get the cleanest trip and he negotiated some pockets and holes and overcame it.”

Thomas said Catholic Boy’s goal will be the Breeders’ Cup at Del Mar in November with a final lead-up in the Pilgrim Stakes-Gr.3 at Belmont Park on September 30.

More Than Ready was trained by Todd Pletcher to win the King’s Bishop Stakes-Gr.1 at Saratoga and also prepared his colt Made You Look to claim last year’s With Anticipation. 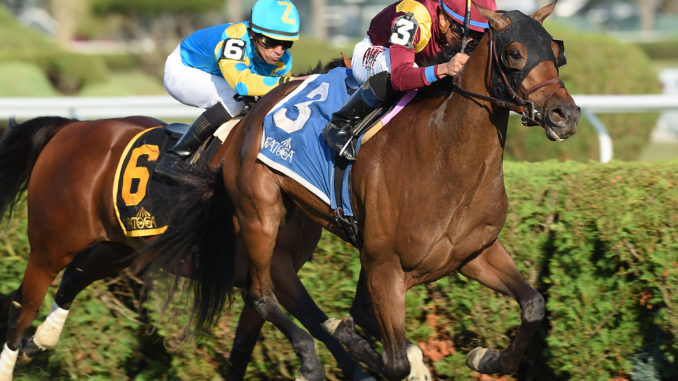