More Than Ready 2yo Hit The Road is bound for the Breeders’ Cup Championships following a last-to-first victory in the $100,000 Zuma Beach Stakes (LR, 1200m) at Santa Anita on Sunday.

Hit The Road is the 198th stakes winner by More Than Ready.  The Vinery legend joins Danzig in fourth place on the all-time stakes winners list behind Danehill, Galileo and Sadler’s Wells.

Trainer Dan Blacker revealed his colt was going to run in the Del Mar Juvenile Gr.1 last month but had been sidelined with a cough.  “He recovered and has matured all summer.  He’s got the mind of an older horse.

“He’s been working well and we expected a big performance.  I’m just so thrilled for the owners for giving me a chance with a horse like this one.”

Blacker, 37, is hoping make the cut for the Breeders’ Cup Juvenile Turf Gr.1 at his home track in four weeks.  “When we bought him, we knew he had a grass pedigree and hopefully would run well on turf, but you never know until they do it.”

Hit The Road (2c More Than Ready – Highway Mary by US Ranger) had struggled when making his debut on dirt but is undefeated in two starts on turf.  He was purchased by Australian agent Craig Rounsefell for $160,000 at the 2018 Keeneland September yearling sale on behalf of DK Racing, Radley Equine, Taste of Victory Stables and Rick Gold.

Winning jockey Victor Espinoza did not intend to be last on the first turn but had to adjust to avoid traffic issues.  They stalked the pace on the backstretch before responding on the turn.  “He recovered so quickly,” Espinoza said.  “He had such a good turn of foot.  In three jumps, I was right up there.”

Hit The Road joins Rushing Fall and Catholic Boy as More Than Ready stakes winners bred and reared by Fred Hertrich at Watercress Farm in Kentucky.  His dam is a half-sister to Coolmore Stud’s Group-winning stallions War Command (War Front) and Naval Officer (Tale of the Cat).

More Than Ready also sired his 17th individual 2yo winner in North America this year when Power Move scored first-up at Belmont on Sunday.  Positioned midfield on the rails by Jose Lezcano, she angled wide in the straight and offered a good kick to charge past Godolphin filly Lake Avenue (Tapit).

Power Move (2f More Than Ready – Trophy Wife by Giant’s Causeway) is a homebred for the Phipps family who have been breeding champions for five generations.  She is inbred (5×5) to Hall of Fame hero Buckpasser (Tom Fool).  A homebred for Ogden Phipps in the 1960s, he was rated No.14 in the Top 100 USA Racehorses of the 20th Century. 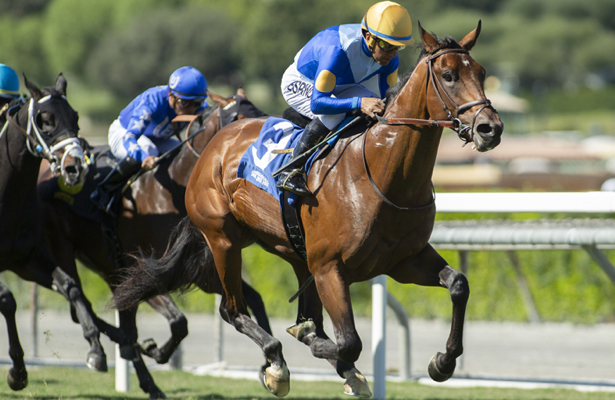