More Than Ready (USA) can extend his record-breaking sequence of wins at the 2020 Breeders’ Cup Championships with his Group 1 stablemates Uni (GB) and Rushing Fall (USA).

Both mares are prepared by Hall of Fame trainer Chad Brown.

The Vinery legend took over at the top of the Breeders’ Cup sires table last year when Uni claimed the BC Mile.  It was his 7th win at the Championships to go one clear of previous standard-bearers Sadler’s Wells and Unbridled’s Song.

Uni is a firming 6-1 third-favourite to defend her BC Mile title against the males this year after winning a second First Lady Stakes Gr.1 at Keeneland on Saturday.  “Chad told us she was circling back to her best form,” part-owner Sol Kumin explained.  “We were hopeful but until you see it, you just don’t know.  She’s just incredible.”

Splint issues had delayed Uni’s timetable this term but she bounced back to winning form after losses at Belmont Park and Saratoga.  Jockey Joel Rosario parked her third behind longshot Crystal Lake and even-money favourite Newspaperofrecord before cruising home by a length in 1:34.90s over 1600m.

Uni (6m More Than Ready – Unaided by Dansili) is raced by Kumin, Michael Dubb, Robert LaPenta and Bethlehem Stables.  She was a stakes winner in France prior to arriving in North America and her record now stands at 11 wins in 20 starts for $2.58 million in prizemoney.

“This year was tough and when you bring them back at this age, you sort of question yourself,” Kumin continued.  “She had been doing well the last couple of months so we felt like we did the right thing.  Hopefully, there’s one more big effort.  If not, she’s already given us everything.”

Rushing Fall (5m More Than Ready – Autumnal by Forestry) is the 7-1 equal favourite for the BC Fillies & Mares Turf (1900m) following her latest Group 1 victory in the Diana Stakes (1800m) at Saratoga.  Brown has kept her up to the mark at Belmont Park smoking a bullet 60.20s for 1000m on turf last week.

The BC Mile and BC Fillies & Mares Turf will be run on the second-day of the Championships at Keeneland on Saturday, November 7.

And in another twist of fate, both mares have been catalogued for the Fasig-Tipton Kentucky November Sale on Sunday, November 8

More Than Ready unearthed another Group 1-bound filly when Starelle was an encouraging runner-up in the Edward Manifold Stakes Gr.2 at Flemington on Saturday.  Trainer Danny O’Brien announced Starelle will be set for the VRC Oaks (2500m) on Thursday, November 5. 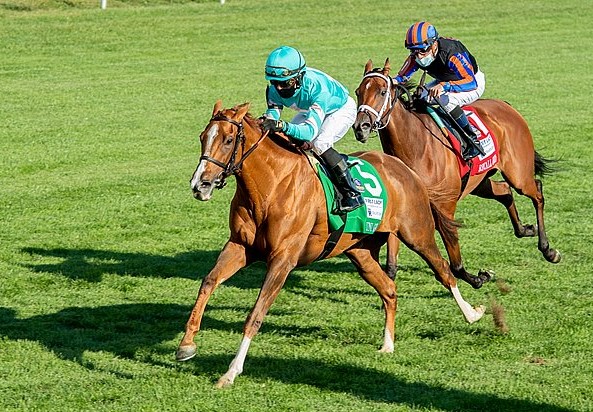