Bob Peters knows more than most about the advantages of breeding to More Than Ready (USA) and he has welcomed news the Vinery legend is returning to Australia this year.

Peters and his wife Sandra have raced 7 individual black-type winners by More Than Ready since New Image landed the 2010 Belmont Oaks LR.  And they can make that 8 when True Attraction runs in the Aquanita Stakes LR at Belmont this Saturday.

“He’s been a great stallion over many years and we’ve been lucky enough to breed some very good horses by him,” Peters said.  “Dreamaway won a Group 1 in the WA Derby and then Perfect Reflection came along and won another Group 1 for us in the Kingston Town Classic.

“Now we’re breeding from both of them and I can see him being just as successful as a broodmare sire in the years to come.  Dreamaway is in New Zealand with a weanling filly by Savabeel and we sent Perfect Reflection to Vancouver for her first cover last year.”

“They liked the wet track last time and both will be suited by 2000m this Saturday,” Peters predicted.  “Mystery Miss was strong and tough and True Attraction’s run was very good, too.”

Kentucky studmaster John Hertrich is another More Than Ready buff having bred his Group 1 winners Rushing Fall and Catholic Boy at Watercress Farm in Georgetown.

Catholic Boy is Horse of the Year material in the USA following a Triple Crown series that failed to identify a standout 3yo colt or filly.  In the last decade, that age group has provided Horse of the Year winners Rachel Alexandra, California Chrome, American Pharoah and Justify but there’s nothing in their league this term.

The Jonathan Thomas-trained 4yo can begin filling that vacuum in the Suburban Hcp Gr.2 at Belmont Park in New York this Saturday.  It’s twelve months to the day since he won the Belmont Derby Gr.1 before going to another level with a four-length victory in the Travers Stakes Gr.1 at Saratoga.

Catholic Boy was skittled at the start of last year’s Breeders’ Cup Classic Gr.1 but confirmed there were no lasting effects from a severe ankle wound in the Dixie Stakes Gr.2 at Pimlico in May.  “It’s fortunate he had time off but not because of that injury,” Thomas said.  “We were very happy with his first-up win in the Dixie and he’s trained on really well.”

After the Suburban, for which Catholic Boy is the 9-5 morning-line favourite, Thomas is keen to take him back to Saratoga for the Whitney Stakes Gr.1 and/or Woodward Stakes Gr.1 in August.  They’re both “Win and You’re In” qualifiers for the $6 million Breeders’ Cup Classic in November..

Rushing Fall takes her turn at Saratoga on Saturday week.  She won the Just A Game Stakes Gr.1 a month ago and will be a star attraction for the Diana Stakes Gr.1 at the Spa on July 13. 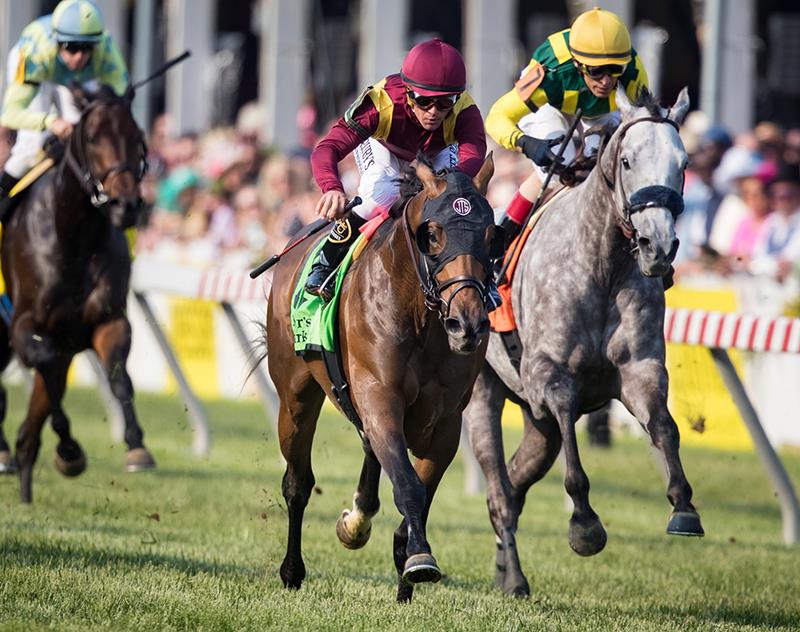