Mossman led the way for the Vinery old-guard on Saturday when his mare Diamond Effort was a first-up winner of The Heath Gr.3 at Caulfield.

The Clint McDonald-trained sprinter is unbeaten in her last five starts and among the picket-fence of wins was the Hareeba Stakes LR at Mornington in March.  “We were really confident coming into today,” McDonald said.  “We’ve got the (Gr.1) Moir Stakes in mind and she will be even better if it’s a wet track.”

Mossman was pensioned in 2018 and Diamond Effort will join his Group 1 roll-call that includes Buffering, Mossfun, Miss Mossman, Plucky Belle and Ofcourseican if she is successful at Moonee Valley on September 25.

Ofcourseican won a Coolmore Classic Gr.1 at Rosehill and her 4yo staying son Persan can build on the family tradition after winning the Neds Hcp (2400m) earlier in the day at Caulfield.

Persan (Pierro) will be looking for a ballot-free entry into the Melbourne Cup Gr.1 when he tackles The Bart Cummings Gr.3 at Flemington on October 3.  “He was quite impressive and can go through the grades,” co-trainer David Eustace predicted.  “His rating will go up again today and we will give him opportunities in the nicer races.”

Ofcourseican is a half-sister to Gimmethegreenlight (More Than Ready) who has sired 25 stakes winners from his first four crops in South Africa.

Congrats stands alongside More Than Ready at WinStar Farm in Kentucky and the Vinery legend sired another black-type winner at Saratoga on Friday courtesy of Selflessly in the Lake George Stakes Gr.3.

Selflessly had won the Miss Grillo Stakes Gr.2 as a maiden filly at Belmont Park in September 2019.  She is trained by Chad Brown and is a stablemate of his More Than Ready champion Rushing Fall who won the Diana Stakes Gr.1 at the Spa on August 23.

In Perth on Saturday, Testa Rossa’s brilliant mare This’ll Testya returned from a break to speadeagle a smart field of sprinters at Belmont.

“She’s still roly-poly and there’s lots of improvement to come,” trainer Adam Durrant said.  “Her manners have improved, too.  She has been known to go off and has really tested the boundaries in the past.”

Bred and sold by Dawson Stud for $42,000 at the 2017 Perth Magic Millions, she races for syndicate managed by Larry Dwyer.   Her dam Camille’s Girl (Flying Spur) hails from the family of Sydney Group 2 winners Katima (Silver Shadow Stakes) and Differential (Pago Pago Stakes).

“She’s come forward in leaps and bounds,” Pateman said.  “She settled in front and let rip when I gave her a kick.  She a proper racehorse and could be something special1”

Testa Rossa is also enjoying a well-earned retirement at Vinery after siring 66 stakes winners.  This’ll Testya can make that 67 at the Ascot summer carnival. 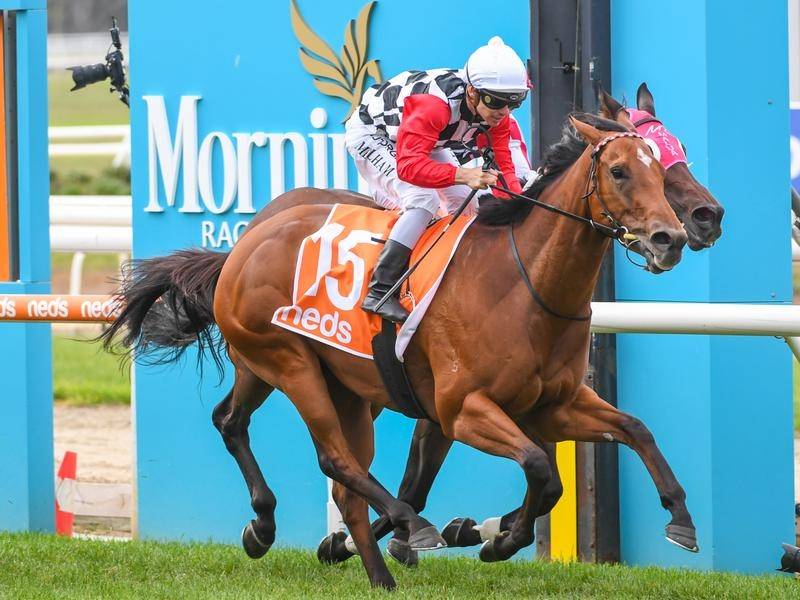