Federation of Bloodstock Agents Australia admitted three members at its last meeting and all three are well-known throughout the industry.

Mark Pilkington was born and bred in Western Australia and began working for Goodwood Bloodstock as a pedigree consultant in the 1980s.  Its Ascot office was also the launching pad for Mike Becker, Simon Vivian, Murray Tillett and Damon Gabbedy before it was eventually bought out by Magic Millions.

Moving to Melbourne in 1999, Pilkington managed the Australian business affairs of David Hayes until he returned from Hong Kong in 2005.  It signalled the beginning of an extraordinarily successful run for Lindsay Park and Mark’s duties included overseeing the selection and purchase of stock and selling the horses on to stable clients.

That association ended in 2012 when Hayes changed his business model and Mark took stock after years of travelling around the world chasing owners and horses.

Pilkington has since become an industry innovator with the launch of Horse Training Packages.  It’s an enterprise that has been introduced with the aim of simplifying the financial arrangements between owners and trainers.

Dave Mee established Pinhook Bloodstock in 2005 and since then has bought and sold over 850 horses valued at more than $27 million.  They’ve won hundreds of races in 8 different countries.

Mee’s lifetime association with thoroughbreds goes back to his family involvement in breeding and racing in the South Island of New Zealand.  His CV includes posts with Patrick Hogan, Gai Waterhouse, David Payne, Clive Brittain (UK) and Taylor Made Farms (USA).

Louis Le Metayer grew up at Haras Du Buff in Normandy and was initially a freelance auctioneer for Goffs France and Agence Francaise.  He arrived in Australia in 2005 and joined Lindsay Park as a track rider before branching out to client relations and bloodstock selecting yearlings and selling tried horses.

Arrowfield Stud called and Louis worked in the bloodstock and marketing office under John Messara for four years before launching Astute Bloodstock in November 21012.

The list of FBAA members can be found at:  www.bloodstockagents.com.au 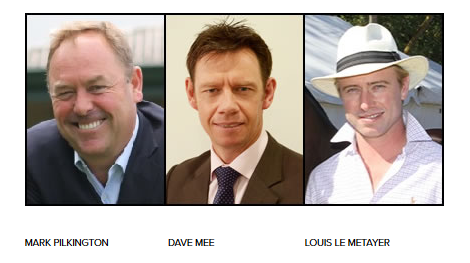