Star Turn has received a significant pedigree update in South Africa on the back of his encouraging start to stud life at Vinery.

The Group 1 sprinter is stopping his mares with a very high fertility rate and that’s enabled Vinery to increase his first book to more than 150 mares this season.

Breeders who came on board would have also been pleased his hear his younger sister Shufoog won her maiden by more than three lengths at Turffontein on Saturday. 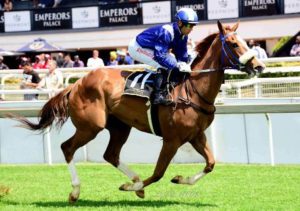 “We expect her to go on from here,” de Kock added.  “She has a presence that will intimidate the opposition wherever she lines up in future.”

De Kock trained another Australian-bred maiden winner for Sheikh Hamdan on Tuesday when Jazaalah saluted at Vaal.  She is by Vinery champion More Than Ready and is a younger sister to Huegill who was Group 1 placed in the 2011 Caulfield Guineas before transferring to WA.