Vinery sire Headwater joined a log-jam at the top of the Australian second-season winners table when Leeside stormed home at the Gold Coast on Saturday.

Leeside (NZ) came from 8 lengths off the pace at the top of the straight to score by a half-panel in the Festive Feast Maiden.  The Chris Waller-trained filly was stepping up to 1400m for the first time since arriving in Australia.

Headwater, Pride Of Dubai and Spill The Beans have all sired 18 individual winners in Australia this season and the trio are also jostling for positions in the Top 5 for prizemoney.

Leeside (3f Headwater – Seonia by Sebring) is raced by NZ bloodstock agent Michael Hughes with Queensland-based brothers Chas and Cam Stewart.  “I bought her for $70,000 at Karaka last year from Rich Hill Stud,” Hughes recalled.  “She started out with Pam Gerard at Matamata and we tried to qualify for the Karaka 2yo Million.

“In hindsight, that was probably a mistake.  Nothing went right for her before she was transferred to Chris.”

Leeside was unplaced on debut in the Wakefield Challenge Gr.2 at Trentham in December and a month later ran into a place behind subsequent Group 1 winner Cool Aza Beel at Matamata.  That was despite her name being mentioned in dispatches after both outings.

Stewards reported she jumped awkwardly and raced three-wide without cover at Trentham.  She also stepped slowly second-up at her home track and was then crowded and had to be steadied twice.  Jockey Cameron Lammas was inconvenienced again at the 400m mark when she became awkwardly placed on heels.

After joining Waller’s Gold Coast yard, she took a while to acclimatize and is still a work in progress according to Hughes.  “She was a bit of a handful but there appears to be some upside with her after Saturday.  We will give her one more run before sending her out again.  Eventually, she should get a good mile.”

Her dam Seonia won at her first try over 1600m at the Sunshine Coast for John Meagher.  She crossed the Tasman to Rich Hill Stud after changing hands for $130,000 at the 2017 Magic Millions National Sale.

She was carrying Leeside and her 2yo is a Vadamos (Fr) filly named with Shriyaa (NZ) with Ciaron Maher & David Eustace.

“There’s another race for her at the Gold Coast in a fortnight and I would love to be there with my old mates Chas and Cam who live at Noosa,” Hughes lamented.  “Pity about that drama with the border!”

The brothers might be expats but the Stewart family has a famed heritage in Scotland and New Zealand.  Leeside races in the Stewart Tartan silks and there’s a link to another colour synonymous with the national game in NZ.  Their father J J Stewart MBE entered Kiwi folklore when coached the All Blacks in the 1970s.

Headwater (Exceed And Excel) is covering a full-book at Vinery this year and he has 10 yearlings entered for the Gold Coast Magic Millions Sale starting on Tuesday, January 12. 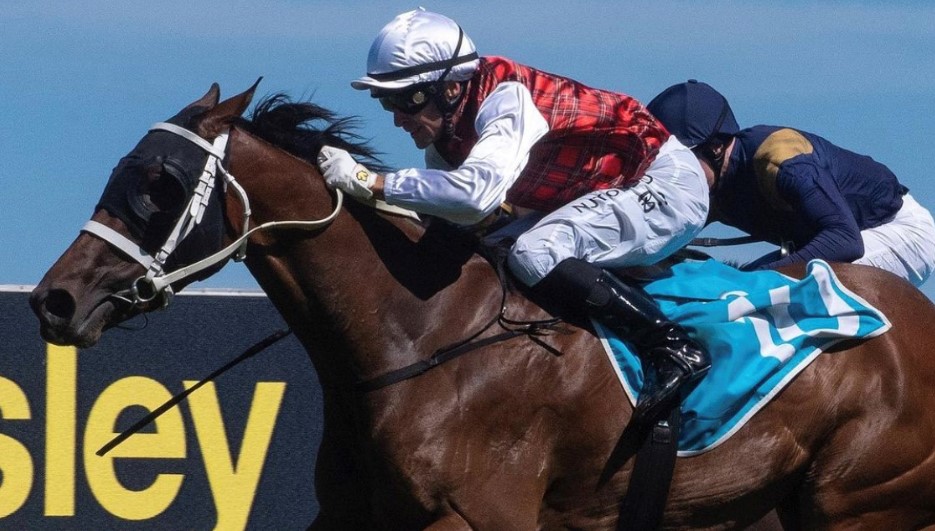