New Zealand Bloodstock’s Premier Sale held steady off the back of last year’s record-smashing results with an average of $172,803,

The average for the 338 lots that changed hands was down 2% following a 17% increase in 2016.  After the Monday and Tuesday sessions, turnover rose 5% to more than $58.40 million and the clearance rate remained at 78%.

“While we couldn’t match last year’s record average, the more important median has stuck firm at $140,000 and turnover is up,” NZB Managing Director Andrew Seabrook said.  “We’ve offered more Premier Sale horses this year and had a buying bench with enough extra depth to compete for them.”

Big-hitters China Horse Club, BBA Ireland and Godolphin’s Sheikh Mohammed were among those to secure some of the 10 Lots to sell in excess of the half-million dollar mark.

Top-price was the O’Reilly brother to Shamexpress who sold for $825,000 on Monday morning to a partnership comprising Alan Bell Racing, China Horse Club and Newgate Farm.

Wallace also combined with Ciaron Maher to secure Windsor Park’s much-talked about white colt by Shamexpress for $510,000.  “He’s an interesting one even when you look past his colour,” Wallace explained.  “He has great muscle, strength and an amazing temperament having been under immense scrutiny all week.  He handled the spotlight and extra pressure like a true professional.”

Wallace defeated underbidder David Ellis after a duel that showcased the brilliance and humour of retiring NZB auctioneer Joe Walls.  He was given a standing ovation after bringing down the gavel on 45 years of service to the industry.

Shamexpress was the leading first season sire with an average of $192,500 off the back of a $15,000 service fee.  “There are some nice young sires starting to emerge here in New Zealand and we’ve got a lot of faith in Shamexpress,” Windsor Park studmaster Rodney Schick said.  “He’s been well-received by the Australian buyers who got to see first-hand what an explosive sprinter he was and tit’s been a nice reward for those that have supported him.”

David Ellis cemented his spot as the leading buyer by aggregate ($4.19 million) with 26 yearlings set to be trained by Jamie Richards and Stephen Autridge.  His highest priced purchase was Cambridge Stud’s Exceed and Excel – Oasis Rose colt knocked down for $625,000.

“I think it’s been enormously successful and I take my hat off to the team at NZ Bloodstock for bringing together such a strong buying bench,” Ellis said.  “It’s a credit to the company and the vendors and I must say it’s been a lot of fun.” 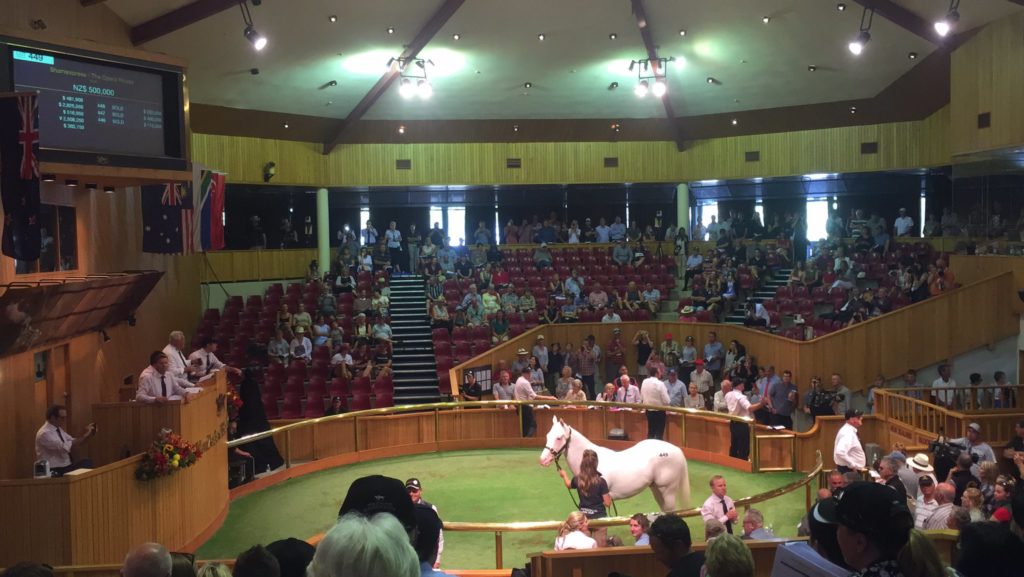