Casino Prince is closing the season with a trademark winning rush and among them have been recent 2yo winners Casino Kid and Sunrise Ruby.

Casino Kid made it 10 wins in the last month for the Vinery Stud stalwart in the Kurrinda Bloodstock Maiden (1100m) at Wellington on Monday.  The Jan Bowen-trained youngster sprinted home in the straight to score running away from Gold Lunar (Olympic Glory).

Newcastle-based owner Dan Morice bred him by using Casino Prince over Cyclone Annie (Hurricane Sky) who is a winning half-sister to Ponton Flyer (VRC Kewney Stakes Gr.2).  She also has a yearling filly by Press Statement.

Casino Prince filly Sunrise Ruby was equally impressive last time out for Victorian owner-breeder Susan Zeitz.  Trained by Mitch Beer at Albury, she won on home turf despite racing in the three-wide line against older horses in the Purjen Couriers Maiden Plate (1175m).

Zeitz races her in a syndicate that includes Stockwell Thoroughbreds studmaster Mike Becker.  “I bought her dam Scarletta (Distant Music) because she’s related to Black Caviar, All Too Hard and Magnus,” Zeitz recalled.  “She is producing such big foals – Sunrise Ruby was 76kg.”

Becker was prepping her Casino Prince full-brother as agent for Zeitz for last week’s Inglis Gold Yearling Sale but Beer jumped the gun earlier this month.  “Mitch has a high opinion of Sunrise Ruby and didn’t want to risk the colt going to Sale,” Becker said.  “He was coming down to buy the colt anyway and grabbed him early to syndicate.

Casino Prince opened his 2yo account this season when Sunborn won at Newcastle in December and she also ran fifths in the Inglis 2YO Millennium LR at Warwick Farm and Riesling Slipper Gr.2 at Randwick.

Sunborn returns from a spell at Rosehill this Saturday for a Group 1 campaign heading towards the Golden Rose on September 26.  Bred by Bangaloe Stud, her dam Honeymoon Cruise (Fastnet Rock) is a three-quarter sister to Hong Kong Group 1 winner Mt Stunning.

“I knew she would be up and running early,” trainer Edward Cummings said earlier this season.  “She’s from an in-form, active family and Casino Prince is coming off a bumper year.”

Sweet Deal is another Casino Prince with a Group 1 goal in the new season – trainer John Thompson is setting her for the Empire Rose Stakes (1600m) at Flemington on October 31.

“She’s an amazing mare, she just keeps getting bigger and stronger every time she comes back,” Thompson said.  “It wouldn’t surprise me to see her go to an even higher level this spring.  Nash (Rawiller) has every confidence in her and they make a great pair.”

Sweet Deal was bred by Pip Cooper and she claimed Group 3 victories in the Tibbie Stakes and Triscay Stakes this season.  Cooper sent her dam Dorothy Evelyn (Royal Academy) back to Casino Prince and retained the resultant foal who is a rising 2yo colt now.

Sunshine Coast trainer David Vandyke has designs on the Sydney spring carnival with his Casino Prince mare Baccarat Baby and she will be more than just a travelling companion for stable star Alligator Blood (All Too Hard).

Baccarat Baby is a homebred for Peter Harris and Matthew Irwin and they decided to keep her in training after a last-start placing in the Sapphire Stakes Gr.3 at Doomben.

“Peter and I basically breed to race and its worked out perfectly,” Irwin said.  “She’s won twice at Group 3 level and has a double-cross of Fanfreluche (Northern Dancer) who was the Eight Carat of North America.”

Owner-breeders looking for a bargain this season need look no further than Casino Prince at Vinery.  He stands for a $5,500 (inc GST) service fee. 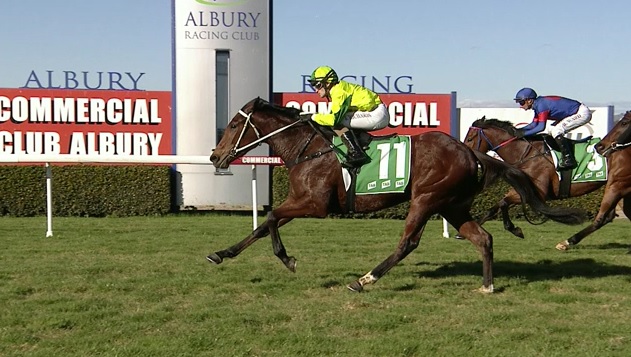