Hong Kong buyers were out in force during at the NZB 2YO Sale on Wednesday and among the high-priced targets were sons of Press Statement and Headwater.

Vinery’s first-season sires finished with ‘personal best’ sale bids of $420,000 at Karaka.  They were both sold by Riversley Park’s Sam Beatson and finished equal second on the leader-board during trade on Day 1.

The 2YO Sale was also a PB for Beatson who dominated with 7 lots in the Top 10.  “I couldn’t have asked for more and it exceeded our expectations,” he said.  “We knew we had a nice line-up of horses, but to get that sort of money for them was fantastic.” 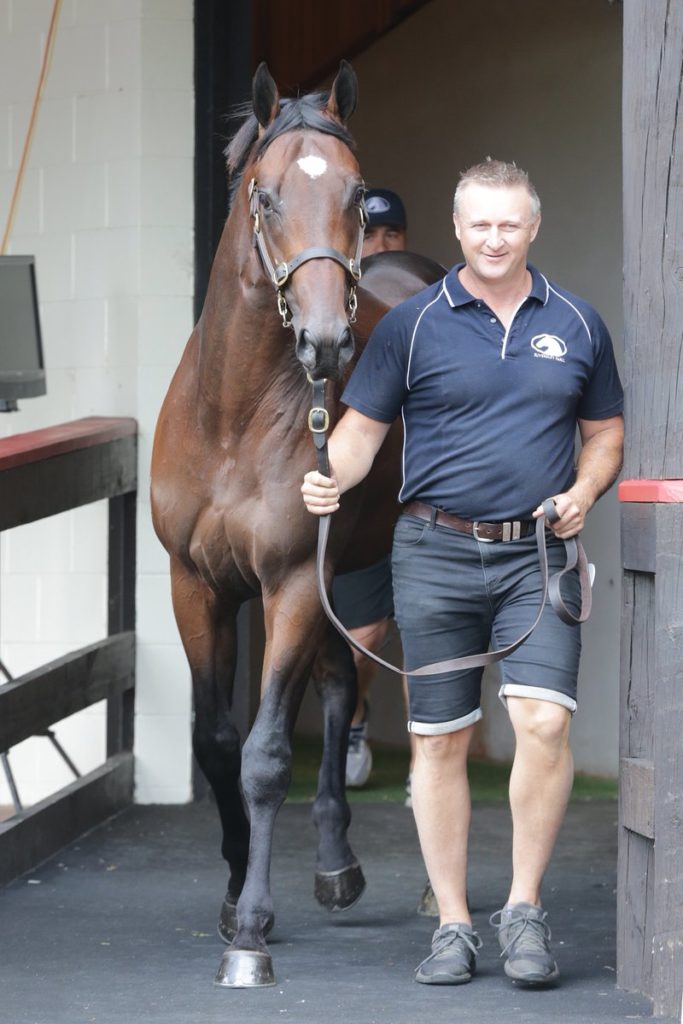 The Press Statement – Karata colt (pictured at Karaka) was bought by trainer Dennis Yip and the Headwater – Red Duchez gelding is another bound for Hong Kong after being purchased by Magus Equine agent Willie Leung.

Pin-hooked for $165,000 at Melbourne Premier in March, the Press Statement is from a daughter of Australian Horse of the Year Let’s Elope and will head off-shore after six months in New Zealand.

“Hopefully, he will develop in a Hong Kong Derby horse,” Yip said.  “He’s from a staying family and looks very strong.”

The Headwater caught the eye with the fastest breeze-up (10.30s) at Te Rapa last month and Leung had to beat off some spirited opposition on behalf of owner Maurice Koo Win Chong who races Group 1 sprinter Mr Stunning.

“He is a lovely horse and will be trained by Frankie Lor,” Yeung said.

“He’s very athletic and breezed up really well.  There were some other Hong Kong trainers on him so I had to pay a bit more than expected.”

The Karaka returns were major mark-ups for Press Statement and Headwater who both stand for $16,500 service fees at Vinery.

Vinery legend More Than Ready also figured in the Top 10 with Kilgravin Lodge’s colt from Mineko (Fastnet Rock) selling for $280,000.  Purchased by Cypress Point Agistment, he will likely trial for Byerley Park trainer Jenna Mahoney before transferring to Hong Kong.

“He’s a nice, correct colt who is definitely going to grow into an athletic racehorse,” Mahoney predicted.  “He looks like a sprinter-miler and we like the More Than Readys because he’s a consistent sire and this colt is from an up-and-coming family.”