Perth Racing ensured her memory will live on by introducing the Marjorie Charleson Classic in 2019.

Charleson came to Australia from New Zealand in 1965 to pursue an acting career, but her influence on Western Australian racing is where she left an indelible mark.

She was the first female public relations officer of any thoroughbred club in Australia when appointed to the position by the Western Australian Turf Club.  In an era and industry that was predominantly dominated by male participation and bias, Charleson led the way for gender equity and was considered the first lady of Western Australian racing. 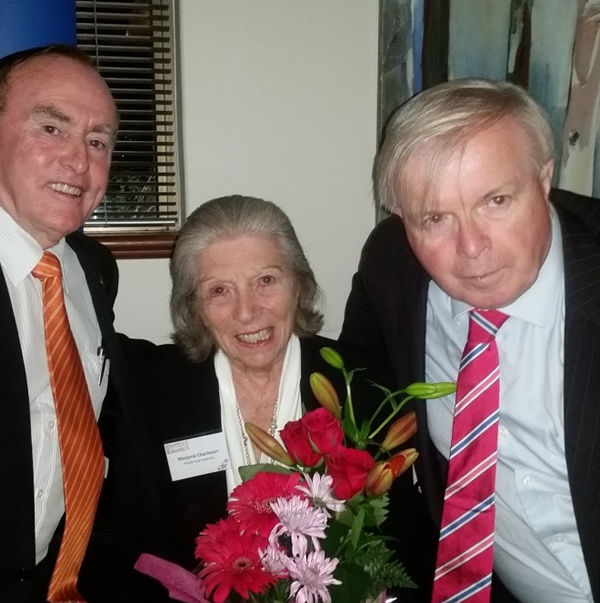 In an array of wonderful achievements, Charleson (pictured with Bernie Ryan and Ernie Manning) was best known for her persuasive talents in luring Australia’s best horses, trainers and jockeys to the Ascot carnival.

The atmosphere was electric when more than 40,000 Perth racegoers watched turf great Kingston Town, whose connections were encouraged by Marjorie to race in WA after his record-breaking third consecutive Cox Plate triumph in 1982.

Ascot erupted as the champion edged ahead to achieve a Western Mail Classic victory.

An incredible crowd of 47,000 was in attendance when Sydney, Brisbane and Adelaide Cups winner Reckless raced at Ascot in 1978.  The idolised stayer and his revered veteran trainer Tommy Woodcock had become the Australian people’s favourite.

“My work has been all about the racing industry,” Marjorie told journalist Ernie Manning in a wide-ranging interview last year.  “I’ve never sought personal glory and I was so fortunate to be directly involved in those magic years of WA racing.

“Horses have been a priority in my life since I was five years old.”

Marjorie acknowledged her promotion of Ascot and Belmont Park racing was driven by extraordinary leadership and support from outstanding WA Turf Club chief executive Harry Bolton.  He had arrived from South Australia in 1958 and inspired resurrection of the WATC during a 20-year term as CEO.

Marjorie was a popular and respected visitor to Melbourne, Sydney and Adelaide racing carnivals from the 1970s and 1980s.  New Zealand was also a promotional destination for the public relations dynamo.

“I thought it was important to meet trainers and jockeys in their own territory, at early morning trackwork,” Marjorie said.  “They respected my presence and appreciated information I gave them on Perth carnivals.”

Then there were the New Zealand trainers including Ian Steffert, a winner of two Perth Cups with veteran marvel Magistrate, and Barney Meyer, an Australian Derby victor with Kankama.

Overseas stars Lester Piggott, Steve Cauthen and Willie Carson were among jockeys who rode at Ascot in summer and Gianfranco Dettori (father of champion English rider Frankie Dettori) competed in Perth during two stints in 1969 and 1970.

“I would like to think my racing industry work would encourage other women in business endeavours,” Marjorie said.  “The horse is my first love in racing, but I always thought it was important to ensure race days had big attendances.”

“I feel we also made a positive contribution to the WA breeding industry when arranging in the early 1970s for Perth Yearling Sales to be transferred from Claremont Showground to Belmont Park racecourse,” Marjorie said.  “Mr Bolton did not hesitate when I suggested that we should arrange for yearling sales to be held at Belmont.”

Marjorie published Racebreed Magazine before settling off the pace due to illness in recent years but was inducted into the Belmont Small Business Hall Of Fame in 2012.

“I’m so appreciative of the racing industry’s immense support but I believe the Marjorie Charleson Classic is an acknowledgement of overall promotional work in the industry, not just my contribution,” she said.  “My wish is that it will encourage the next generation to become more involved in racing promotion.”