Press Statement’s first crop has received a positive start at the new-season 2yo trials on the Gold Coast.

His filly Press Start jumped straight into the bridle to lead Tuesday’s hit-out and looked a readymade prospect under Tennille Gray.  With minimal coaxing over 900m, she won by more than two lengths from Queen Kay (Zoustar).

Trainer Greg Hickman bought her for $180,000 on behalf of Ferguson Bloodstock at the Magic Millions in January.  “That was right on our limit so it was a relief when the hammer went down,” Hickman recalled.  “She has plenty of scope and I can see her getting out to 1400m.”

Press Start is the third foal of China Horse Club’s Testa Rossa mare Rossarita who is a winning half-sister to the dam of More Than Ready’s international stayer Eagle Way (Queensland Derby Gr.1 & HKJC Cup Gr.2).  Her first foal Altair (Zoustar) is a Sydney winner and her 3yo filly Messing (Dissident) won a Canterbury trial for Chris Waller last week.

Sledmere Stud sold Press Start at the Gold Coast (as agent) and studmaster Royston Murphy said she rated with the best of their draft to the Magic Millions.  “She’s a ripper and every visitor to the farm liked her.  She’s a fine example of the quality Press Statement puts into his stock.”

Press Statement stands at Vinery Stud and he has 9 lots catalogued for the Magic Millions 2YO Sale at the Gold Coast on October 14 and 15.  Among them are a half-dozen entrants from Baramul Stud including the half-sisters to Illuminaire (Lot 103) and Riva De Lago (Lot 191).

Press Statement (Hinchinbrook) completed a Group 1 double in the J J Atkins Stakes and Caulfield Guineas in 2015 and he is standing for a $16,500 (inc GST) service fee at Vinery. 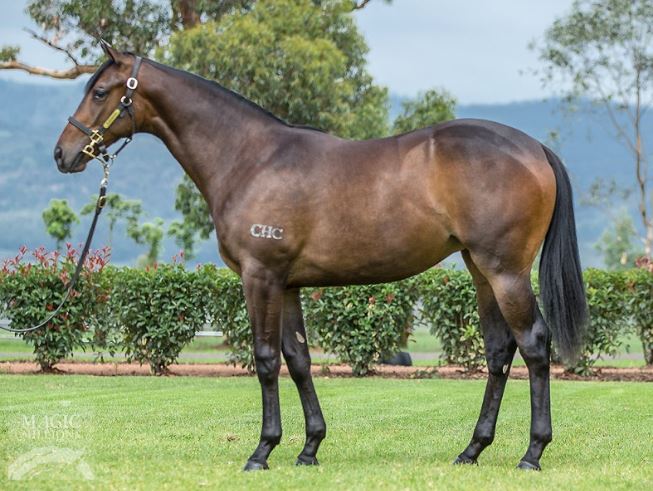 PRESS START
Pictured prior to the Magic Millions Yearling Sale