The underlying depth of Press Statement’s first-crop will surface this season when his Hong Kong progeny debut for trainers like Dennis Yip and Frankie Lor.

Press Statement stands at Vinery Stud and was an Australian Top 10 freshman last season despite a short-fall of starters due to his popularity with overseas buyers.  Top price among his first crop was a $420,000 youngster bought by Yip at the 2019 NZB 2YO Sale and subsequently named Leisure And Gold.

Leisure And Gold (3g Press Statement – Karata by Elvstroem) has been making impressive progress and stretched out nicely for Derek Leung at Sha Tin on Monday morning.  “Hopefully, he will develop in a Hong Kong Derby horse,” Yip said.  “He’s from a staying family and looks very strong.”

His dam is a daughter of Australian Horse of the Year Let’s Elope.

Leisure And Gold is the most forward among five sons of Press Statement in Hong Kong.  Lor has two in work while Micheal Chang and Ricky You also have their geldings getting ready for griffin races later this season.

Free Foal (3g Press Statement – Games by Lonhro) is trained by Lor for The Brotherhood Syndicate.  He won a Gold Coast trial in March for Aquis Farm trainer Kacy Fogden before shipping out to Hong Kong.

Lor also has an unnamed Press Statement 3yo from Stolen Girlfriend (Canny Lad) in work for owner Deborah Ho.  Sold by Vinery (as agent) for $50,000 at the 2019 Magic Millions National Yearling, he won a Rosehill trial for Gerald Ryan in July and his older half-brother Hinyuen Swiftness (Duke Of Marmalade) won twice at Sha Tin in May.

Steel Win (3g Press Statement – Lago Joy by Encosta de Lago) is trained by Chang after making $37,500 at the 2019 Magic Millions 2YO Sale.  He was bred on the Victorian-NSW border by Reg Ryan and was prepped for sale by Tal Nolen at Benalla.

Another Hong Kong-bound graduate sent to Fogden, he was runner-up in a Beaudesert trial in May, two lengths ahead of subsequent Dulcify Stakes LR winner Mo’unga.  “He was a nice type and I bred Lago Joy back to Press Statement,” Ryan said.  “That colt made $65,000 at this year’s Classic Sale and he is also heading to Hong Kong for a client of Upper Bloodstock”

Ricky Yiu’s Press Statement is an unnamed 3yo from Lyka Flyer (Testa Rossa).  He was bred by Eureka Stud’s Scott McAlpine and sold for $53,000 at the 2019 Magic Millions National Sale.  Registered in Australia as Diamond Pixiu, he trialled for Mark Newnham at Warwick Farm and arrived in Hong Kong in August. 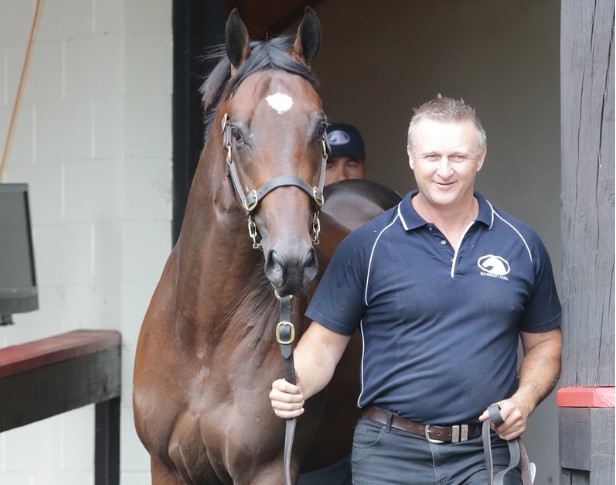