Turning turned the screws on his rivals for the second time in as many starts at Taree on Tuesday.

Still untapped, he won a juvenile maiden at Muswellbrook last month and was way too good against older horses in the Iron Horse Global Hcp (1007m) yesterday.

The Kim Waugh-trained 3yo gelding is the third winner for Vinery sire Star Turn this season following Mensa Maestro (Ipswich) and Startantes (Doomben).

“He’s still learning but has really impressed me,” jockey Rory Hutchins said.  “It was a soft win at Muswellbrook.  I was tempted to kick up and sit outside the speed that day.  Luckily we sat back because the leader ran off on the corner and we took advantage closer to the fence.

“He was left in front a long way out but won with a couple of lengths up his sleeve.  He’s still green and looks around but has been convincing both times.”

Turning stripped fitter at Taree and had the race won at the furlong.  He was cruising before clocking off to land the money as a $2.50 favourite.  “Rory rode him very confidently,” Waugh said.  “He’s talented and won eased down.”

Turning was bred and sold by Fairview Stud’s Ian and Linda Duckworth for $70,000 at the 2020 Inglis Classic Yearling Sale.  His dam Miskish (Fastnet Rock) won twice in Sydney and is a half-sister to Randwick Listed winner Nan Tien (Carrington Stakes & Lightning Stakes).

Turning races for a large syndicate managed by Mark Waugh and among the part-owners are Gary and Gemma Arthur who have driven up from the Riverina to watch both his wins.

He helped Star Turn take the first-season winners’ premiership down to the wire with that Muswellbrook victory on July 31.  The Vinery freshman sired 19 individual winners and was just pipped by Capitalist (20 wins). 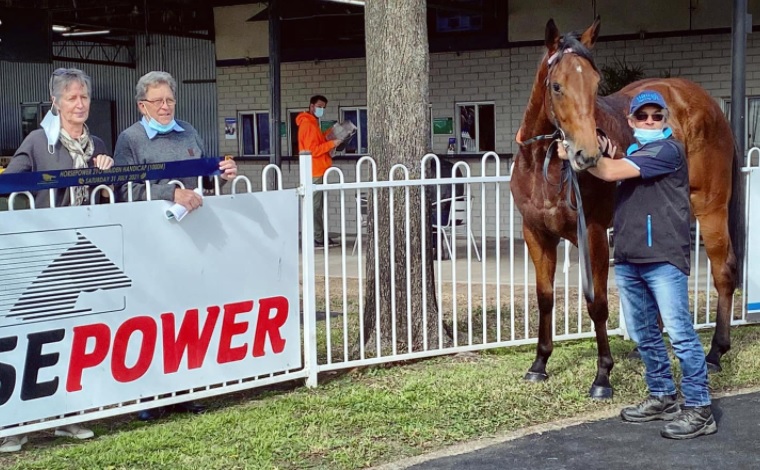