Tajmali gave Rangeview Stud the first-leg of a winning double at Ascot after getting her own way in front of the TABtouch Westspeed Hcp (1200m).

“I didn’t think she would get to the front – we planned to sit outside the leader,” trainer Peter Fernie admitted.  “But Kyra (Yuill) slowed them down and the mare always gives it 110%.  She never wins by far but loves racing.”

Tajmali’s dam Liberty Isle (Statue Of Liberty) won at Yarra Glen for Mick Price and is a half-sister to Personal Ensign (LR Northwood Plume Stakes).  She was a $36,000 buy for Rangeview at the 2010 Inglis Great Southern Broodmare Sale and has also thrown Perth winners Kakadu (Galah), Watto’s Fury (So Secret) and Champagne Diva (So Secret).

Former Rangeview resident Henny Hughes (USA) followed up with Chesten Flyer in the Seacorp Hcp (1000m).  He looked a place hope at best in the straight until launching a late burst under Lucy Warwick to collar River Beau right on the line.

Chesten Flyer had been battling a long run of outs for trainer Adam Fairey but a repeat performance will see him returning to the winners circle sooner rather that later.  “He didn’t look right and wasn’t enjoying himself during a previous prep so we put him back in the paddock,” Fairey said.

“He came back firing but he’s still a bit of a fat coach potato.  That’s probably why he sprints late so he doesn’t have do too much work for too long.  I think that suits him.”

Chesten Flyer was conceived in the second and final crop by Henny Hughes in WA.  He had started stud life shuttling from Kentucky to Darley in NSW until his sale to Rangeview in 2012.  Owner Rob Gray on-sold him to Yushun Stud in Japan after his champion filly Beholder won the 2013 Breeders’ Cup Distaff at Santa Anita.

Namerik Thoroughbreds owner Alan Bansemer bred Chesten Flyer from Never Guilty (Favourite Trick) who is a half-sister to Justice Prevails (G2 Todman Slipper Stakes).  Her 2yo is a My Admiration colt with Adam Durrant and she foaled a Safeguard colt last September.

Rangeview stands Galah (Redoute’s Choice) for a $4,400 service fee alongside So Secret (Danetime) at $2,750.  They have been joined at the Burekup-based farm this season by LR Blue Diamond Preview winner Long Leaf (Fastnet Rock) who is priced at $5,500.  All fees (inc GST). 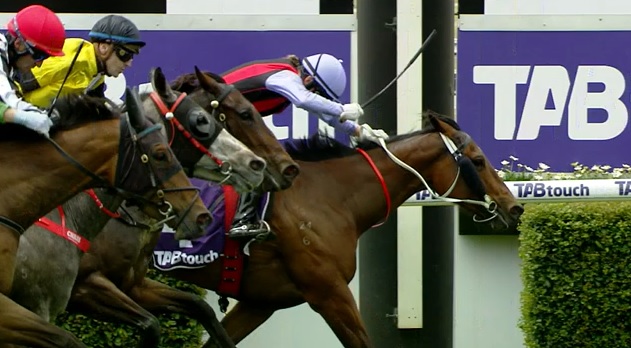