Valour Road and Chloe Azzopardi stole a winning break on their more fancied rivals to land the G3 Prince Of Wales Stakes (1000m) at Ascot on Saturday.

Trainer Simon Miller entrusted the claiming apprentice with the ride from a wide draw and she had him travelling on the speed from the outset.  They were the first to set sail after front-runner Mervyn in the straight and had enough in reserve to deny the late closers.

“I’m so proud of Chloe.  She works hard and deserves everything that comes her way,” Miller said.  “I thought he would be awfully hard to beat in running when he was travelling on the steel.  He looked like the old Valour Road.  I just didn’t know whether the wide run without cover would take a toll late.”

Valour Road (5g Frost Giant – Melba Avenue by Street Sense) was bred and sold by Yarradale Stud for $60,000 at the 2017 Perth Magic Millions and the latest win sent his career stats to 7 wins in 18 starts for prizemoney of $1.07 million that includes Westspeed Bonuses of $93,600.

Raced by Des Carvell, Yarradale Stud’s Ron Sayers and a jubilant syndicate that celebrated the million-dollar milestone, he had already won at Group 2 level in the 2018 Karrakatta Plate and 2019 Euclase Stakes in Adelaide.

Azzopardi’s only other ride on Valour Road had been a winning one at Ascot in April 2019.  “I was worried where we would settle from out there but he travelled that well beneath me with the blinkers on,” she said.  “He’s a fabulous horse and always tries his heart out.”

Valour Road led home a Yarradale quinella from Essential Spice (Gingerbread Man) while old marvel Rock Magic (Redoute’s Choice) was a close up third.  Miller indicated he will race next in the G3 Colonel Reeves Stakes (1100m) on November 14 in the lead-up to the G1 Winterbottom Stakes (1200m) on November 28.

His dam Melba Avenue has a yearling colt and a colt on the ground by Exceed And Excel.

Earlier in the afternoon, Chantorque remained unbeaten in three starts at Ascot with another on-pace victory in the Crown Perth Plate (1000m).  Trainer Russell Stewart is hoping the daughter of Yarradale champion War Chant (USA) continues to improve into the LR Placid Ark Stakes (1200m) on November 21.

The Ascot double closed a month to remember for Yarradale with Missile Launch (LR Kalgoorlie Cup) and Dance Music (LR Northam Cup) headlining a heap of winners for the Gidgegannup stud in October. 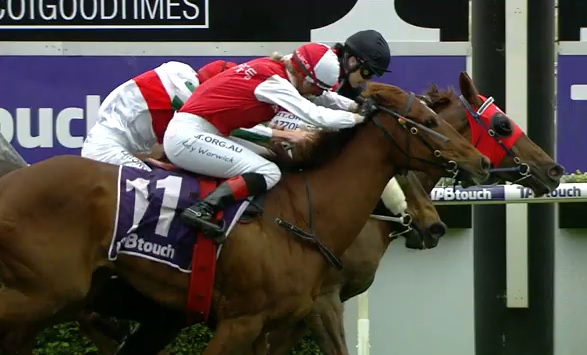