Originally quoted at $15 on Thursday, the Steve Wolfe-trainee firmed into $3.70 and was brave in the final furlong to edge out Niccovi (Nicconi).

“I was confident but didn’t get any of the $15 – they’re too clever for me,” Wolfe said while trying to supress a smile. “All credit to the horse and (Shaun) McGruddy. I thought they were gone for all money at the 200m.”

Red Can Man had been placed in Ascot and Belmont juveniles last season prior to a brilliant first-up victory at Northam on September 19. “They flew at Northam and McGruddy had trouble holding him slow enough. He’s still learning but settled beautifully today and I think we’ve got a lot to look forward to later this season.”

He’s a half-brother to WA stakes winner Quilista (Scandal Keeper) who won the G3 Birthday Card Stakes in Sydney last year and the LR Bright Shadow Quality at Doomben in May. She was sold to Aquis Farm as a broodmare prospect for $950,000 at the Magic Millions National Sale in June.

Their dam Brocky’s Ace has foaled five winners and she has a yearling filly by Yarradale Stud champion War Chant (USA).

Gingerbread Man (Shamardal) also has Neurological primed for the LR Hannans Hcp (1400m) in Kalgoorlie this Thursday. He stands at Yarradale for a $4,400 service fee. 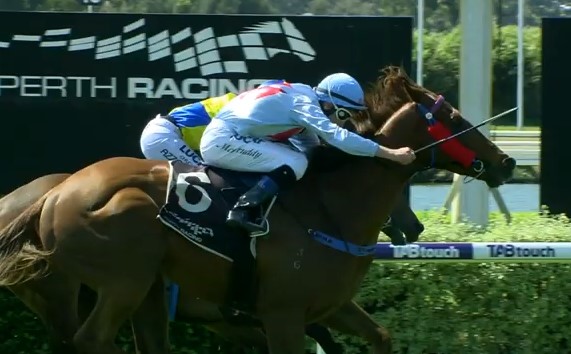