Groundbreak took a path less travelled along the inside of the track at Flemington to redeem himself with connections on Saturday.

The All Too Hard gelding was scratched and then suspended by stewards at Flemington on June 8 but he was back in the good books after winning the Austy Coffey Hcp (1200m).  Jockey Dwayne Dunn ignored a track-bias that favoured outside gates down the straight to win first-up after a spell.

Groundbreak was all set to resume a fortnight ago, however, he was fractious in the gates and was withdrawn on veterinary advice at headquarters.  Team Hawkes sent him to Julian Welsh for a crash-course in barrier manners at Booralite Park and he returned in a much better frame of mind.

“Julian did a great job and he’s developing into a more genuine horse now,” co-trainer Wayne Hawkes said.  “He really wanted to win today.  In hindsight, we pushed him too early.  Then we learned the All Too Hards are much better if they’re given time.”

Groundbreak is the first foal of Adelaide Guineas-LR winner Booklet (Tale of the Cat) and made $175,000 from the Newgate Farm draft at the 2016 Inglis Easter yearling sale.  He was runner-up at Rosehill on debut as a November 2yo hence the decision to keep him in training for good runs in the Talindert Stakes LR and VRC Sires’ Produce Stakes Gr.2 at Flemington.

Dunn was aboard during that first trip to Melbourne and they also combined to win at Caulfield in January.  “He got a lovely cart into the race and we were never going to lose,” Dunn said on returning to scale.  “He was ready to win last time and the boys had him fit enough today.”

Groundbreak was bred by Nick & Amy Vass and is raced by Rupert & Cheryl Legh and Clare & Jenny Hawkes in a syndicate that also includes Newgate Farm manager Henry Field.

All Too Hard maintains a 63% winners-to-runners career strike-rate and he leads third-crop sires for wins in Australia this season (171).  The record in that category – Smart Missile (180) – is well within his sights before July 30. 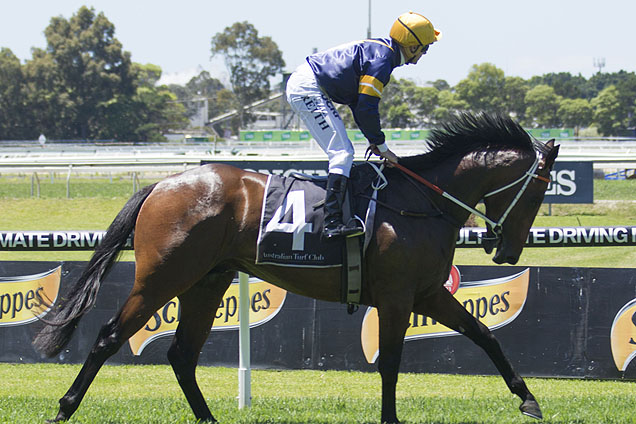