Under the urgings of champion jockey Damien Oliver, Chouxting The Mob (NZ) has continued his winning run in the VRC Great Ocean Road Hcp (2520m) at Flemington.

The consistent son of WA sire Jimmy Choux (NZ) made it four on the bounce as a $2.15 favourite for trainer Simon Morrish.  “I keep saying I don’t know how good he is but he’s a real stayer,” Morrish declared.  “He’s a credit to himself and it was a great ride by Damien.  Just like Beau (Mertens) two weeks ago.”

Chouxting The Mob (5g Jimmy Choux – Bidthemobgooday by Reset) knuckled down to the task in the final furlong and relished the Soft 7 surface to defeat Flow Meter and Last Week by a neck apiece.  He will be favoured to win again when lining up in the $150,000 Banjo Paterson Series Final (2500m) in a fortnight.

“It’s pretty hard to throw last-start winners into the paddock,” Morrish added.  “The Final back here is the obvious target but I don’t want to hurt him.  He’s been terrific to us and we will just see how he pulls up before making a decision.”

Chouxting The Mob is from a Doomben winning half-sister to the dam of this year’s G1 Australian Derby winner Levendi.  Second-dam Tully Thunder (Thunder Gulch) won a G1 Australasian Oaks.

Jimmy Choux transferred from Rich Hill Farm in NZ to Roselee Park at Serpentine earlier this year.  Since then, his Kiwi raider The Bostonian claimed a Group 1 winning double in the Doomben 10,000 and Kingsford Smith Cup at the Brisbane winter carnival. 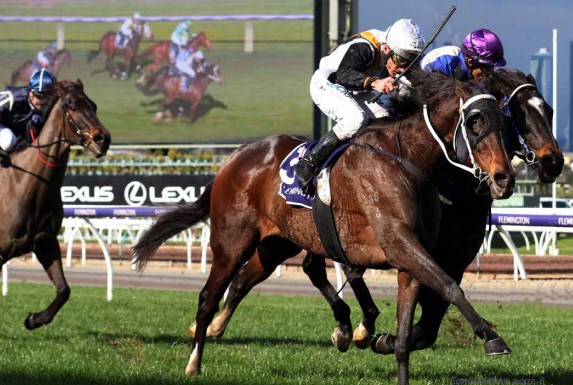