A field of 11 accepted for the final race at Moonee Valley on Friday night but only four of them went to the post for the Independent Turf Services Hcp (1200m).

With good reason.  Matching strides with $1.20 favourite Marabi was always going to be a tough call.  Those that went missing were running scared and the others were running for second.

Marabi is unbeaten in three starts for Vinery partner Greg Perry and trainers Ciaron Maher and David Eustace.  In just five weeks, she has graduated from a Pakenham maiden to front-running victories at Moonee Valley winning by a combined margin of 15 lengths!

“We will raise the bar again but keep her at 1200m for the time being,” Maher said as Ben Allen brought the 4yo mare back to scale.  “She’s a natural and is very sharp.  Greg has been patient and that’s paying off now.”

Allen has been aboard in all three outings.  “She was comfortable in front and in a good rhythm tonight.  When we balanced up, I let her rip and she was tough to the line.  She’s going great guns and is improving with each run.”

Perry bred Marabi by putting Champion sire I Am Invincible over Nakaaya (Tiger Hill) who had won a Sunline Stakes Gr.2 exactly ten years before her daughter completed a hat-trick.  That was the night Moonee Valley was bursting at seams to witness Black Caviar win the 2011 William Reid Stakes Gr.1.

Nakaaya went to another level at stud for Perry until she passed away in September.  Provincial winners Jobodwana (Congrats) and Zolani (More Than Ready) arrived before she hit the jackpot with VRC Oaks Gr.1 winner Aristia (Lonhro).

Marabi was next in line and she was followed by Ruddock (Written Tycoon) who is showing potential with two recent wins at Canterbury for trainer Annabel Neasham.  Her final foal is a 2yo filly by Flying Artie. 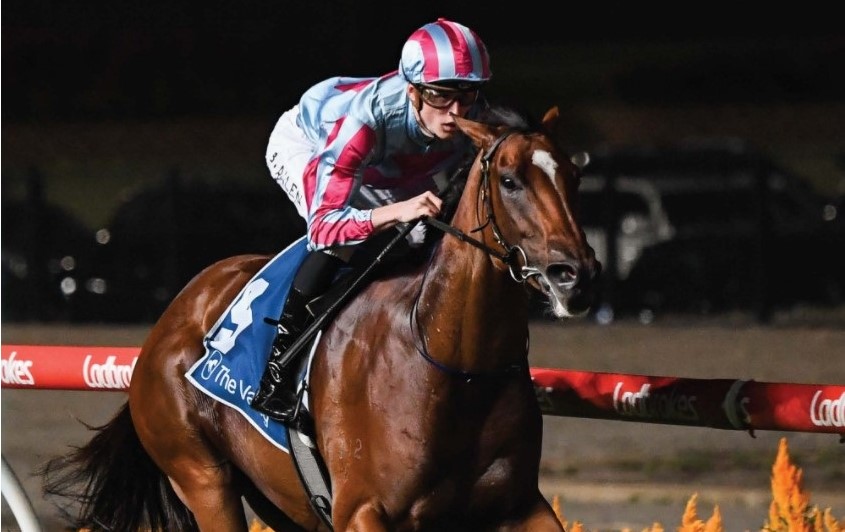