Ginger N Rye has taken a liking to Saratoga’s turf track this summer and it’s paid off with a Listed victory in the Smart N Fancy Stakes (1100m).

The More Than Ready mare (pictured) was helped by furious splits from Chilean-bred front-runner Paquita Coqueta.  She marked time behind the speed before dashing along the hedge for a decisive victory in a blistering 60.75s for 1100m.

Ginger N Rye is the 174th stakes winner by Vinery champion More Than Ready who won the King’s Bishop Stakes-Gr.1 at the Spa and sired Copper Bullet to win the Saratoga Special-Gr.2 last week.

The Sagamore Farm homebred had won an allowance-level sprint at the start of the current Saratoga meet on July 23 and was good enough to take the next step on Sunday.  “I knew the speed was going to be fast so I tried to just sit with her and make one run,” jockey Ricardo Santana said.  “Man, she took off turning for home and was really rolling at the end.” 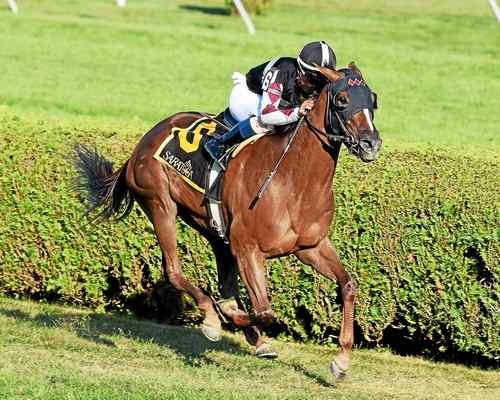 Her dam La Milanesa (Mr. Greeley) was purchased by Sagamore Farm for $565,000, in foal to More Than Ready, from Forging Oaks Farm at the 2011 Keeneland November Sale.  She is a winning half-sister to Bowman’s Band (Meadowlands Breeders’ Cup-Gr.2) and the dam of Pollard’s Vision (Illinois Derby-Gr.2).

Ginger N Rye was placed in two stakes races at home in Maryland last year but trainer Horacio DePaz knew something wasn’t right when she came back.

“She’s usually a very happy filly and when we started her this year she was quiet.  Her blood wasn’t quite right, so we had to give her extra time to get over that hump.

“Her first-up win here was a very nice effort,” said DePaz.  “Obviously, with the lay-off and her being five, you wonder if she would come back. So it was nice to see she was able to see her run like that.”

Since founded in 1933, Sagamore Farm has held international recognition as a premier breeding and training ground in the thoroughbred industry.  Initially owned by Alfred G. Vanderbilt, Jr, it’s most famous equine resident was Hall of Fame champion Native Dancer, the grandsire of Mr. Prospector and damsire of Northern Dancer.

“Saratoga is such a special place to win a stakes race,” Sagamore president Hunter Rankin said.  “Ginger N Rye trains at Sagamore and loves it there.  It’s really cool to have a place like Sagamore where Mr. Vanderbilt used to train so many horses, and we’re trying to bring that back.”

More Than Ready was in superb shape at the Vinery Parades on the weekend in advance of his next southern book beginning this Friday.  He stands for a $66,000 (inc gst) service fee.