Hydro Star outclassed his rivals with an eye-catching debut in the Ladbrokes 2yo Hcp (1000m) after being backed into a $3 favourite.  Given time to find his feet behind front-runner Aqua Girl (Headwater), the bold-striding colt put them away in a couple of strides on a Soft 7 surface before being eased down by Jamie Mott.

Headwater has now sired 12 first-crop winners from his base at Vinery Stud and the latest could be something special.  “He’s still a big baby,” McArdle said.  “This was his first trip away from home and he’s not really a 1000m horse.  And he will be better again on top of the ground.

“He was going to Hong Kong but Jamie pleaded with us to keep him here after riding him for the first time.  He jumped off and said, ‘Wow.  What’s this.’  We knew he was real good after he put away (Group 3 winner) Humma Humma in a gallop before he had even trialled!”

McArdle will consider stepping Hydro Star straight into Group 3 company for the Vain Stakes (1100m) at Caulfield on August 15.  He is raced by Lauriston Thoroughbreds owner James O’Brien and will spend a week at his farm on the beach at Corinella before a decision is made on his immediate future.

“He’s six months away and is still doing things wrong,” McArdle continued.  “But he’s by an up-and-coming stallion from a good female family and is a quality horse.”

Hydro Star (2c Headwater – Final Star by Delago Brom) is a half-brother to Cogliere, a $360,000 earner to date with highlight wins at Randwick and the South Grafton Cup.  They’re from a half-sister to the dam of Melbourne Group 3 winners Nediym’s Glow (General Nediym) and Red Colossus (Testa Rossa).

Bred by Holbrook Thoroughbreds, he was retained by Lauriston Thoroughbreds after being withdrawn from the 2019 Inglis Ready 2 Race Sale.

Headwater (Exceed And Excel) stands at Vinery for a $13,750 fee (inc GST) payable on live foal. 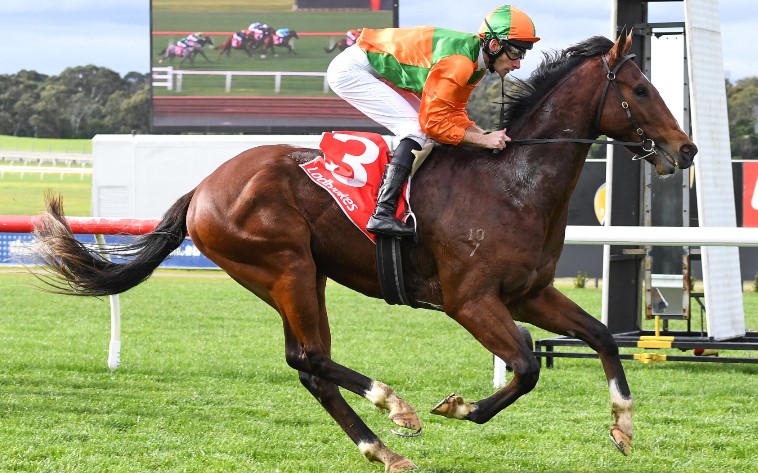