Maya Bay was the first of five home-town winners for the stable and he looked a readymade racehorse on debut in the TAB Maiden Hcp (1000m).  Landing in front for Michael Cahill, he drew away in the straight despite being eye-balled by Dragon Miss (Hidden Dragon) from the half-mile.

“He’s a professional,” Tony Sears said on Monday morning.  “We gave him a hit-out while waiting for the name to come through and he won it by five lengths.  It was his first start today but he walked around the enclosure like he had already done it 100 times.

“Michael actually thought he was a bit too quiet and clicked him up going around the barriers.  You wouldn’t know he’s a colt but he’s all business once they jump.  He was just too good for them and had plenty left on the line.

Maya Bay is a Headwater-stamped chunky chestnut and is the fourth winner for the Vinery freshman who has fellow Queensland colt Wisdom Of Water on a Group 1 mission to the J J Atkins (1400m) at Eagle Farm on June 6.

Sears Racing won’t be pushing their colt in his first prep.  “We might take him to town but we’re not in a rush.  He paraded like the best horse in the race yesterday but, in saying that, he’s still immature and will be all the better when we bring him back next time.”

Sears has another Headwater colt in work named Be Water My Friend and he will be ready to trial in a week or two at Clifford Park.  His dam Whisper Of Hearts (Duport) is an unraced half-sister to Phar Lap Stakes Gr.2 winner Traitor (Mossman).

Headwater (Exceed And Excel) will stand for a $13,750 (inc GST) service fee at Vinery this year. 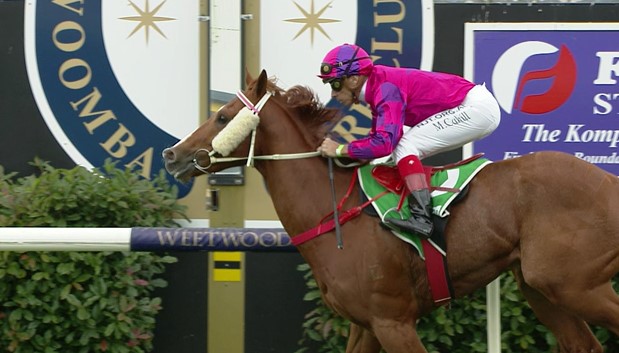