His promising gelding Rangipo cleared out for a three length victory in the Erickson Whanau Maiden (1000m) at Taupo on Friday.  He was racing first-up for trainer Tony Pike after two unplaced efforts for Doug Cave last season.

“I’m still learning about him –he only arrived here last month but I knew he would run well based on his trial at Cambridge,” Pike revealed.  “Vinnie (Colgan) never let his head go that day and he won by a couple of lengths.  He’s a pretty smart horse.”

Stryker’s only other starter across the Tasman has been recent Taupo winner She Is Stryking.  The Frank Ritchie trained filly was Group 2 placed earlier this year and she holds a nomination for the G1 NZ 1000 Guineas at Riccarton on November 14.

Rangipo (3g Stryker – Holloway by Zabeel) has the potential to embark on a black-type career of his own and is bred to get over ground for owner-breeders John and Margaret Thompson.  He is from a half-sister to Penitentiary (LR Geelong Classic) and Maze (G2 Awapuni Gold Cup).

Stryker (Fastnet Rock) was a Group 3 winner of the BTC Classic at Doomben and Three Bridges stands him for an $11,000 (inc gst) fee. 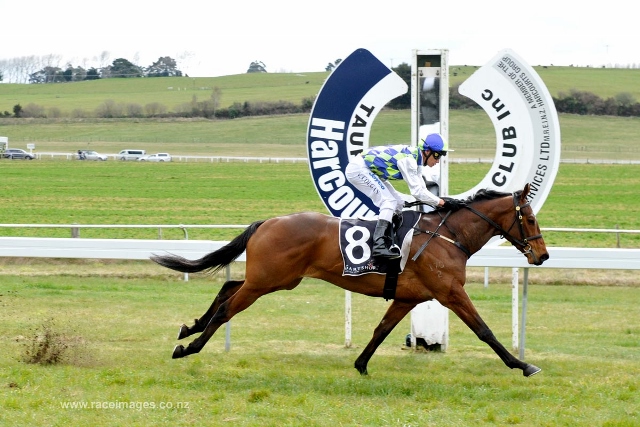