For their first foray into the digital sales realm, Tony and Di Marwick’s Secret View Thoroughbreds offered their 2021 yearling draft in the Inglis February (Early) catalogue and grossed $109,500 for the six colts and fillies.

“It’s really a first for WA and look we’re very happy with the result as well as how Inglis Digital assisted us throughout the process which makes such a difference,” Tony Marwick said.  “In the market place you’re just looking at what might have the biggest reach and we decided to try online with the yearling draft, because the platform has been so successful and obviously has this great reach in terms of the buying bench.

“We had about 20 people come and inspect the draft and to gross more than $100,000 is wonderful, so we’d definitely look at going down the Inglis Digital path again with a yearling draft.”

A Snippetson colt out of six-time winning mare New Vogue (Dane Shadow) topped the draft when purchased by Robert Gulberti who is in the process of relocating his operation from Broome to Perth.  He became the first WA trainer to win a Darwin Cup when Ihtsahymn claimed the Top End feature in 2019 and 2020.

“The Snippetson is a big, strong type that walks well and looks to have plenty of scope.  I thought the colt was very similar to his sire,” Gulberti said after inspecting the yearlings (pictured) this week.  “Di was very helpful and we made the most of the four and a half hour drive down to the Great Southern.

“I’ve bought some tried horses for the Broome circuit on Inglis Digital before and some weanlings which are yet to be broken in, but my intention is to continue to be a boutique operation.” 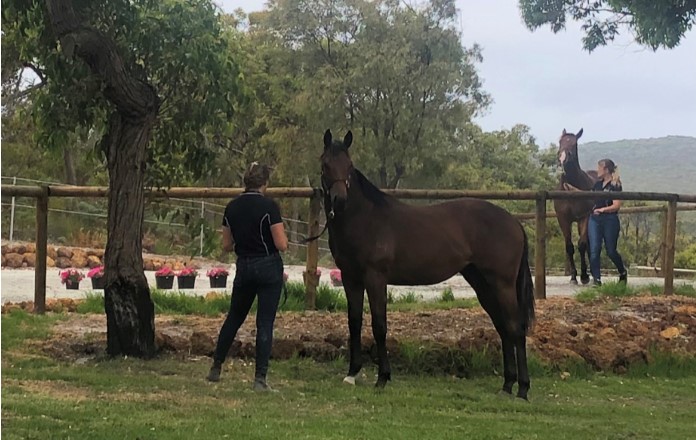