Selflessly made a quantum leap from maiden company to become More Than Ready’s 196th stakes winner in New York on Sunday.

Runner-up on debut over 1100m at Saratoga last month, she stretched out to 1700m in the Miss Grillo Stakes Gr.2 and held off the closers to score a one-length victory at Belmont Park.

Trainer Chad Brown was winning the Miss Grillo for the 8th time since 2008 and he confirmed a late-entry fee will likely be paid for Selflessly into the Breeders’ Cup Juvenile Fillies Turf Gr.1 at Santa Anita on November 1.

“I will talk to the owner but if she comes out of this race sound and doing well, I would be inclined to pay it,” Brown said.  “We let our young ones come along at their own pace and wait until they’re ready.  She was unlucky at Saratoga and came into this race training really well.  I just treated her debut as if she had won.”

Selflessly (2f More Than Ready – Uniformly Yours by Grand Slam) surged past tearaway leader Wicked Title into the straight and, under steady handling from Javier Castellano, fended off a late rally from the favourite Crystalle.

She will attempt to give Brown a fourth Miss Grillo – BC Juvenile Fillies Turf double following Lady Eli, New Money Honey and Newspaperofrecord.

Selflessly is a half-sister to Maryland Media Stakes LR winner Enchanted Ghost and cost $190,000 as a foal at the 2017 Keeneland November Sale.  She is owned by Klaravich Stables principal Seth Klarman who has also raced the Brown-trained More Than Ready stakes winners Life Imitates Art, Partisan Politics, Ready to Act and Consumer Credit.

More Than Ready has sired 16 individual 2yo winners in North America this year and Selflessly became his second stakes winner among them following Magic Dance (Churchill Downs Debutante Stakes LR).

The Vinery legend is on track for a fourth Breeders’ Cup 2YO triumph at Santa Anita with Selflessly and last-start Iroquois Stakes Gr.2 runner-up Scabbard. 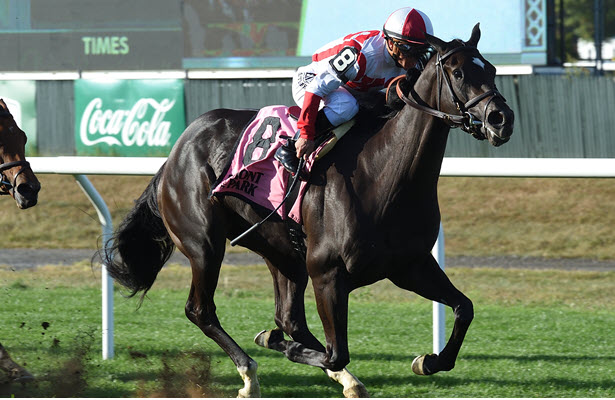