Queensland raider Alligator Blood has firmed from $15 into $5 for the Caulfield Guineas Gr.1 after keeping his unbeaten record intact when racing first-up in Melbourne on Sunday.

The All Too Hard 3yo sat on the speed and kept the locals at bay to win the Caulfield Guineas Prelude Gr.3 by three-quarters of a length from short-priced favourite Dalasan.  He arrived from the Sunshine State with an unblemished record in four starts for trainer David Vandyke.

Alligator Blood is the 10th stakes winner by Vinery sire All Too Hard and Vandyke believes he will be even better stepping up a furlong into the Caulfield Guineas on October 12.

“Wait until we get out to the mile – he might do what his dad did,” Vandyke said referring to All Too Hard’s Caulfield Guineas victory in 2012.  “He was well-behaved and in the right head-space today.”

Alligator Blood’s spring program had been interrupted when he lashed out in the tie-up stalls prior to the Ming Dynasty Stakes Gr.3 in Sydney last month.  Vandyke took him back home and regrouped before heading to Melbourne.

“After the carry-on at Rosehill, we brought him to Caulfield for a gallop on Tuesday morning and I’m glad we did.  He seemed a bit lost in the new surrounds but Ryan (Maloney) said there were no problems this afternoon.”

Dalasun has retained favouritism for the $2 million Caulfield Guineas at $4 from Alligator Blood ($5) and Vinery colt Exceedance ($7) who lost no admirers when hitting the line hard in the Golden Rose Gr.1 on Saturday.

Red Ransom was Vinery’s foundation sire in Australia and among his winners from that family include Australian Horse of the Year Typhoon Tracy and Flemington stakes winners Red Element and Red Bomber.

All Too Hard stands for a $27,500 (inc GST) fee at Vinery and his Melbourne mare Too Good Too Hard is also being set for black-type at the spring carnival after a convincing win at Mornington on Saturday. 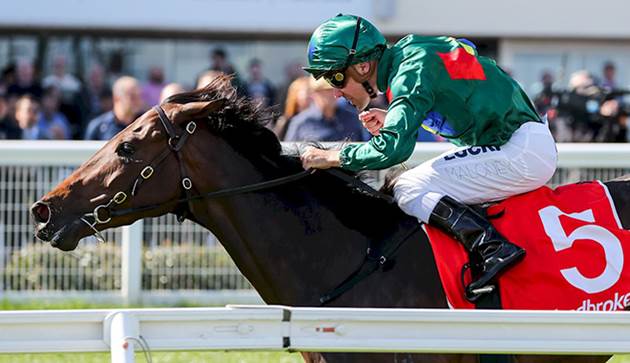