Put A Spell On You is the latest promising 3yo to win at Ascot for Oakland Park’s emerging sire Sessions.

The debutante did it the hard way on Thursday in the XXXX Summer Bright Maiden (1100m).  She crossed from a wide gate to sit outside the lead and then fought back after being headed in the straight to score by a half-length from Wicklow Princess (Verrazano).

The Fred Kersley-trained filly is the fifth individual winner by Sessions this season and he’s challenging for a Top 10 spot on the Australian second-season premiership with earnings over $440,000.

Put A Spell On You is the second winner from Danish Magic (Danewin) who landed a major pay-day in the $600,000 Heroic Championship at Randwick before retiring to the Hunter Valley.  Her younger brother Hadaaf boosted the pedigree with a Listed victory in the Civic Stakes at Rosehill.

Oakland Park’s Neville Duncan bought her for $14,000 at the 2015 Inglis Broodmare Sale in Sydney and her final foal is a yearling colt by Sessions bred by Ben Duncan.

“He was on a seven-day back-up and was going up to 59kg,” Durrant said.  “He’s a big boy with a bit the learn but was in good order and actually looked better to the eye compared to last week.

“He’s jumps and travels in these shorter races which is encouraging because there’s still plenty in the tank for his next prep when he steps up to 1400m and 1500m.  Winning these Saturday races is also an endorsement of the Westspeed scheme.”

Massimo has earned $280,000 which includes bonuses of $140,000 for Oakland Park and part-owner Renee Durrant.  He’s a half-brother to the dam of G1 Golden Rose winner Exosphere (Lonhro).

Sessions (Lonhro) stands for a $5,500 service fee at Oakland Park alongside King’s Troop who is available for $2,750. 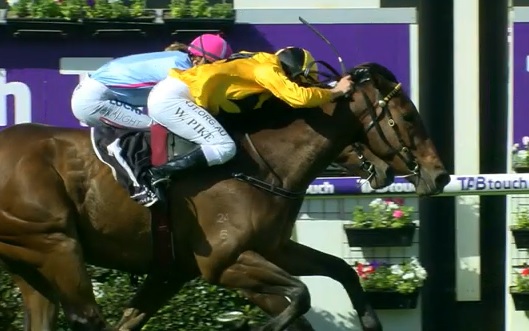 PUT A SPELL ON YOU