The Candy Man’s inspiring recovery from death’s door went to another level when he claimed the Premier’s Cup Gr.3 at Eagle Farm on Saturday.

His can-do attitude has been the catalyst for a winning streak that has caught the imagination of racegoers in Brisbane.  He hasn’t been beaten since December and will now attempt to make it 8 in a row in the Brisbane Cup Gr.2 on June 8.

The Candy Man is the 17th stakes winner by Vinery sire Casino Prince but he’s lucky to even be alive after a horrific stable accident in 2016.  “He required two years of rehab after smashing his jaw and hurting a hind leg while recuperating,” trainer Barry Baldwin recalled.  “I’ve always believed he was a Group horse and now he’s proved it.”

Jockey Michael Cahill was confident of victory when the grey split runners in the straight to overhaul Haripour (Shamardal) by a head on Saturday.  “As soon as that gap appeared, he had it won.  He’s got a terrific will-to-win.  When you ask him for an effort, the response is immediate.”

The Candy Man (5g Casino Prince – Melody by Stravinsky) is a full-brother to Randwick City Stakes LR winner Phrases and was a $120,000 buy for Baldwin at the 2015 Magic Millions 2YO Sale on behalf of owners Lucky Pippos and Gladstone couple Edgar and Cynthia Allen.

He races in the same purple and white silks made famous by 1970s grey icon Gunsynd.  “He’s definitely not as pretty as Gunsynd with seven plates in his jaw,” Baldwin admitted.   “But this is just as satisfying as my win with La Montagna in the (2006) Stradbroke Hcp!”

Casino Prince stands for a $6,600 (inc GST) service fee at Vinery and he came close to completing a feature-race double on Saturday with Lim’s Cruiser at Kranji.  The reigning Singapore Horse of the Year looked set for an unprecedented hat-trick in the Lion City Cup Gr.1 but was beaten a neck by Aramco. 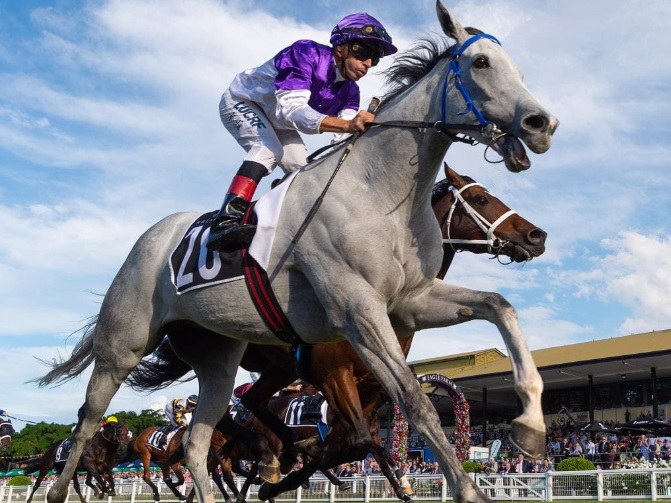