Kalgoorlie trainer Peter Fernie won’t be tempted to keep Smarty in work after the Galah mare landed her fourth win in a row at Ascot.

Smarty completed a hat-trick at the final meeting of the season in the Goldfields last week and she franked that form-line in the Amelia Park Hcp (1400m) on Saturday.  “I will send her out to the paddock now,” Fernie said.  “She’s too good to keep racing on this prep.  Even though she does a lot wrong, she was good enough to win again today.

“She’s come a long way but is still a bit of a hot-head.  I was concerned when the start was delayed so I took her back to the tie-up stalls and gave her a hose down.”

Smarty is a younger half-sister to Too Clever (Rogano) who has won a half-dozen races in Kalgoorlie.  And her unraced 3yo half-brother Big Man In The Sky (Trade Fair) won a Belmont trial on Monday morning.

Owner-breeder Andrew Inglis had bought their dam Pearls Of Wisdom (Pearl Of Love) from Heytesbury Stud at the 2009 Perth Magic Millions.  It was a double celebration for Inglis following the win of his 2yo filly Our Danni earlier in the day.

Winning jockey Mitch Pateman confirmed Fernie’s high opinion of Smarty.  “She threw her head in the air when the pace slackened but then balanced up and gun-barrelled down the straight.  Pete gets them confident in Kal before coming to town.  This one is on the way up and will keep progressing next year.”

Galah (Redoute’s Choice) sired another city winner from his first-crop when Stella Anne was successful on Tuesday.  She has won two of her last three starts at Ascot for Jerry & Chris Stelmach. 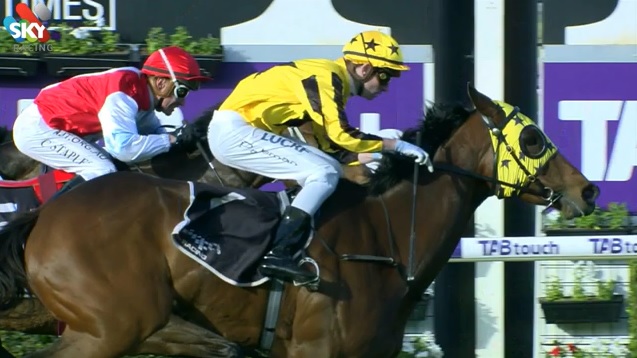