Greg Cave completed a double with Scenic Lodge sires when Snippetson mare Darcele stretched out to 2100m in the Crown Towers Hcp Hcp at Belmont on Wednesday.

The Orange Grove trainer had prepped plunge horse Ay Tee Emm (Dash For Cash) to win at Pinjarra on June 24.  The grey gelding was racing first-up after a spell and was backed from $71 into $6.50.

Darcele (4m Snippetson – Wind Chimes by Hurricane Sky) took advantage of a 4kg pull in the weights to defeat Alkaline (Blackfriars) and Convalese (Playing God) yesterday.  Unlike her stablemate, she drifted to $51 following four unplaced runs since an Ascot maiden win in April.

“She was travelling and I was happy until Wolfie’s horse (Convalese) hooked out at the half-mile,” Cave said.  “I knew it would be a battle of attrition but she was brave and kept kicking to win well.

“Jade (McNaught) worked the mare over a fair amount of ground the other morning and said she didn’t want to stop!  All credit to Jade.  She jumped off and told me to find a race over a mile-and-a-quarter (2000m).”

Cave bought Darcele on behalf of owner Ken Warr for $10,000 at the 2018 Perth Magic Millions.  Bred and sold by Scenic Lodge, she’s the only named foal from a half-sister Russian Playmate (Dr Johnston) who won the Listed La Trice and Starstruck Classics in 2008.

The Snippetson – Hurricane Sky cross has a 100% strike-rate from 6 runners to the races.

Darcele has earned $60,350 in prizemoney including Westspeed Bonuses of $16,500.  She has also accrued EPONA credits worth $3,250 for Warr who has four in work with Cave.  The others were sourced from the Adelaide Magic Millions.

Ay Tee Emm had created headlines after streeting his rivals in the Darling View Thoroughbreds Hcp (1000m) at Pinjarra last month.  “I couldn’t believe the price but I don’t back my horses because that usually stops them,” Cave told the West Australian Newspaper.  “Jade rode him and couldn’t believe how quickly he accelerated.

“He didn’t fire at Belmont last Saturday because he’s a big striding horse and wasn’t comfortable on the heavy track.  He’s only two runs in from a spell and I will get him back out to a mile-and-a-quarter, too.”

Ay Tee Emm (5g Dash For Cash – City Magic by Bletchley Park) was bred at Dawson Stud and is raced by Cave’s wife Kate.  His younger half-sister Beffunjar (Blackfriars) completed a hat-trick at Ascot last season and another half-sister by War Chant (USA) made $100,000 to the bid of Santo Guagliardo (Ridgeport Holdings) at this year’s Perth Magic Millions Yearling Sale.

Cave has been based in WA for a decade but only took out a licence last year.  He started out as a jumps jockey in New Zealand riding for Graeme Rogerson to win feature races like the Wellington Hurdles on Rosenveld and Pakuranga Cup on Cooberex. 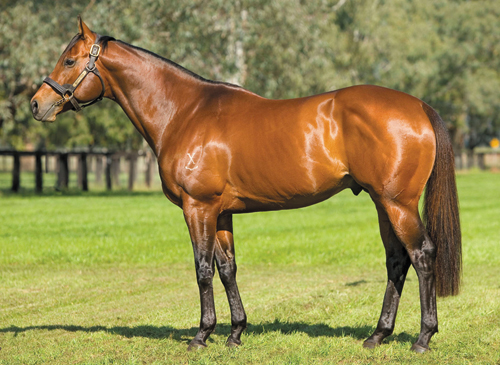