Press Statement was a Group 1 star for Chris Waller so it was appropriate the champion trainer should prepare the Vinery sire’s first winner at Canterbury on Friday night.

The breakthrough came when Spokesman cut the breeze and then maintained a margin to the line in the Canterbury Leagues Club 2YO Plate (1250m).  He defeated Godolphin rep Thermosphere (Exosphere) by a long neck with multi-million dollar yearling Setanta (Fastnet Rock) a close third.

Spokesman had won a Rosehill trial on January 11 and debuted three days later for a placing at Canterbury.  Star Thoroughbreds bought him for $270,000 at the 2019 Inglis Classic Sale.

“That wasn’t the plan but the pace was slow and Nash (Rawiller) took the bull by the horns and pushed forward,” stable spokesman Jack Bruce said.  “He was strong late and looks a definite improver.”

Spokesman drew the outside barrier in a five-horse field and was trapped four-wide in the early stages.  “I wanted cover but that wasn’t going to work so I just concentrated getting him into a rhythm,” Rawiller explained.  “He’s a better chaser but got the job done and had a bit on them.”

His dam Calaluna (Mujahid) was also a Canterbury juvenile winner for the late Bede Murray and second-dam It’s Not On (Tierce) is a half-sister to Champion Australian 2YO Victory Vein (Mr Henrysee).

Star Thoroughbreds manager Denise Martin outbid Gai Waterhouse to buy Spokesman.  “He’s got a lovely page and ticked all the boxes for our team,” Martin said at last year’s Classic Sale.  “Press Statement was an exceptional racehorse and this colt is quite outstanding and will get every chance with Chris. We were up against a good judge but I wasn’t going home without him.”

Spokesman is eligible for the $2 million Inglis Millennium (1100m) at Warwick Farm next Saturday, February 8 and, if he backs up, Star Thoroughbreds and Waller will be eager to go one better after finishing second with Accession last year.

That would be a perfect lead-in to the 2020 Inglis Classic Sale commencing next Sunday.  There are 11 yearlings by Press Statement and the first to parade from Vinery (as agent) is the filly from Fill Me Up (Lot 145).

Fill Me Up’s current 2yo Head On Up (Headwater) was a $105,000 buy for trainers Richard & Michael Freedman at last year’s Classic Sale.

Press Statement (Hinchinbrook) completed a Group 1 double in the J J Atkins Stakes and Caulfield Guineas before retiring to Vinery in 2016.  His second-crop yearlings have sold to $190,000 at Gold Coast Magic Millions and $160,000 at NZB Karaka Sale. 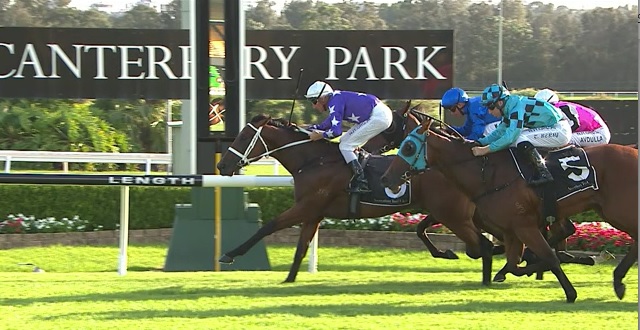