The serving barn is one of the most stressful places on a stud farm and things can go wrong very quickly if an excitable 600kg stallion isn’t in good hands.

A no-nonsense attitude with some TLC is a prerequisite and Kristy Reynolds combines both as the stallion manager at Scenic Lodge in WA.

Reynolds, 21, took sole charge of Snippetson, Universal Ruler and Dash For Cash in the season just gone and she came through with flying colours according to the stud’s general manager Jeremy Smith.

“Kristy is naturally-gifted with horses and has advanced through our system since starting here through work-experience at school,” Smith said.  “I noticed she just seemed to click with the stallions and was very keen to take on the challenge when the stallion manager position became available. 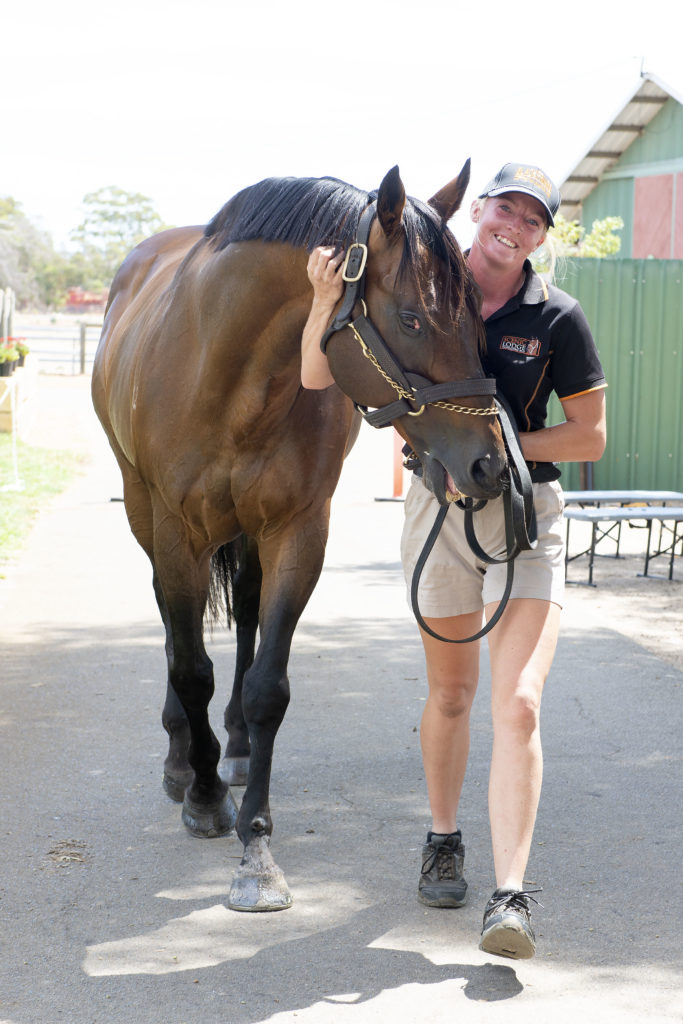 “It was a massive call to give her such a responsible role.  The stallions are our most important asset and I did question whether she was mature enough to ensure covers are done safely with no risk to the stallion, mare or staff.

“I’m delighted to say the stallions have responded to Kristy.  Particularly Snippetson.  He absolutely loves Kristy and I have seen a big change in his personality which shows in the way he’s covering mares

“With that first stud season under the belt, I’m sure Kristy will have learned so much and I look forward to seeing her progress further.”

Snippetson (pictured with Reynolds) has made a successful sea change from the Hunter Valley to Western Australia.  Tinsnip emerged from his first crop to claim Champion WA 2YO honours last season and he followed up with Gemma’s Son who is pre-post favourite for the $250,000 Magic Millions 2YO Classic.

“He’s my favourite,” Reynolds agreed.  “You have to bond and be strong – mentally and physically – so he listens and knows what’s required.”

Kristy grew up in Perth’s eastern suburbs at Maida Vale before the family moved to Lower Chittering following the death of her father in 2012.  “Mum wasn’t into horses.  She took a lot of convincing when I told her I wanted a career in the industry but relented when she realised I had a passion for working with horses.

“I’ve always had a connection to stallions and loved the idea of working with them someday.  Scenic Lodge has provided me with an opportunity and it’s like a dream come true.”

Reynolds went to school at Bullsbrook College and had two years’ work experience at Scenic Lodge in Years 11 & 12.  “That expanded into a full-time job in 2017 and it’s given me the chance to let my love and understanding of stallions shine through and reflect in my ability to do the job well and to the best of my ability.”

The Bullsbrook College connection has also turned into full-time employment for her former schoolmates Teagan Hollister and Lily Smith.  “We’re like one big family at Scenic Lodge.  Everyone looks out for each other.”

The Scenic Lodge team will be out in force when Gemma’s Son runs in the Magic Millions 2YO Classic at Pinjarra on February 8, a week before this year’s Perth Yearling Sale.  He’s trained by David Harrison for syndicate that includes his wife Jenny, Graham & Megan Donovan, Keith & Carol Holly and Lex & Shirley Piper.

Gemma’s Son won first-up at the Perth Cup meeting and then bolted in by four-lengths at Ascot on the Australia Day long weekend.

Snippetson sired him from Princess Gemma (Dr Fong) and she has a Snippetson filly catalogued as Lot 252 on February 18.  “She’s a late October foal and is a really nice filly with time on her side to keep growing,” Reynolds said.  “Lily led in Gemma’s Son last year and he was a lovely type with a beautiful temperament.  We’re full-on prepping for this year and one of the standouts is the Blackfriars sister to Friar Fox (Lot 83).”

Reynolds also breeds Quarter-Horses.  Her latest foal is by WA-bred sire Best I Get An Invite who is based in NSW from USA mare Maybe Vital Signs who boards at Scenic Lodge.

Stallion handlers aren’t as crucial in the Quarter-Horse industry.  Artificial insemination (AI) is legal and all Kristy had to do was pay for a shipment of frozen semen!