The Vinery champion is the damsire of Dornier who produced a strong staying performance to land Australia’s oldest classic.  He took the lead shortly after straightening and kept fighting to defeat NZ-bred favourite Parthesia by a short head.

Racing Victoria has indicated future winners of the VRC St Leger could earn an automatic start in the Melbourne Cup but, for now, trainer John Moloney will be happy if Dornier can win a support race on the first Tuesday in November.

“He’s come in under the radar but has been working up to a win,” Moloney said.  “He can stay all day and will be suited in a race like the Lavazza Hcp (2800m) on Melbourne Cup day.”

Dornier is a 3yo homebred for NSW breeders Julie Sampson and Meridy Taite who bought his dam Deloraine (More Than Ready) for $70,000 out of the Vinery consignment at the 2005 Inglis Easter yearling sale.

Deloraine more than paid her way winning a Listed Hobart Guineas as well as city races at Canterbury and Moonee Valley.  She bowed out shortly after finishing third in the 2008 Group 1 Coolmore Classic won by Eskimo Queen.

The Bowral-based sisters struck black-type with another Vinery graduate a couple of years earlier in Melbourne.  They purchased Gawne for $155,000 at the 2004 Inglis Easter yearling sale and she reimbursed them with a Listed victory in the 2006 Ladies Day Classic at Caulfield.

More Than Ready will return for his 17th southern-hemisphere season in 2017 and his durability is second to none as a shuttler.  On the same day as his latest black-type in the broodmare division, he sired 3yo maiden winners for Gerald Ryan (All Carisma @ Gosford), Lee Freedman (Ready Review @ Moe) and Michael Lane (Everasready @ Pinjarra).

More Than Ready mares have foaled 94 individual winners in Australia this season for prizemoney over $5.54 million.  The only active sire above him on the broodmare premiership is Redoute’s Choice.

Vinery will stand More Than Ready for a $66,000 (inc gst) service fee this year. 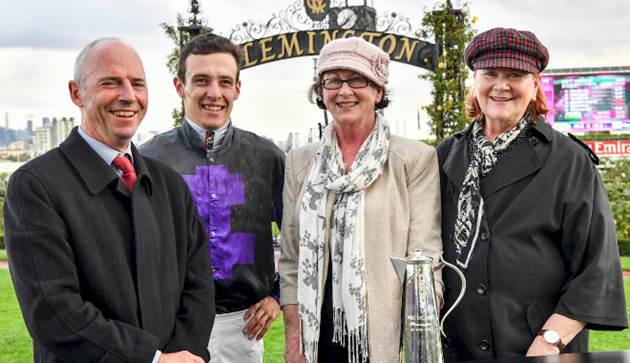