The Inglis Ready 2 Race Sale is less than a fortnight away and there’s every chance Star Turn could sire his first winner in the countdown to October 20.

The Vinery freshman has 8 colts entered among 226 lots catalogued for Riverside Stables.

His first-ever runner to the races was Stellar Magic and she was a good thing beaten when runner-up at Eagle Farm on Saturday.  Stewards reported she was crowded and then clipped heels after the start.  There’s was more trouble in the straight when she was bumped and then disappointed for a run passing the 200m pole.

A couple of hours later, Star Turn colt Astrologer powered home for a Group 3 placing in the Breeders’ Plate at Randwick for Snowden Racing.

It was a very promising start to his stud career and Perth trainer David Harrison will be hoping for even luck in running when his Star Turn filly Galaxy Cat makes her debut in the Initial Plate (1000m) at Ascot this Saturday.

Galaxy Cat (2f Star Turn – Onecatstoomany by One Cool Cat) has been placed in both her trials at Lark Hill.  She was bred by David Bentata and is a half-sister to Magic Millions WA 2YO Classic winner Jericho Missile (Smart Missile).

The first Star Turn to parade at the Inglis Ready 2 Race Sale is Lot 6 from Randwick winner Flitter Bye (Exceed and Excel).  She won at Randwick and her second-dam is Champion Group 1-winning mare Flitter (Bluebird).

“He’s a powerhouse,” Hannover Lodge CEO Hinnerk Hueppe declared.  “He’s a quick-maturing colt and that’s a sure trait he will be sprinting early.”

Valiant Stud’s Fergal Connolly has entered two Star Turns and he rates both as professional colts who will also get to the races early on.  “Star Turn is a typical Australian speed stallion,” he said.  “Our colts are decent-sized and both breezed in a tick over 10.4 seconds.”

The Irish-born horseman had been based in the Hunter Valley for over 8 years before launching Valiant Stud at Aberdeen in 2018.  “I’ve been super impressed with what I’ve seen of the Star Turns so far.  They look readymade.”

The first Star Turn colt to parade from the Valiant Stud draft is from NZ-bred mare In the Moment (Lot 23).  He’s from a half-sister to Autumn Jeuney (MVRC Tesio Stakes Gr.3) and the dam of Little Brown Horse (Qld Arcade Classic LR).

“He’s a robust colt and looks a 2yo type,” Connolly predicted.  “He was super impressive breezing at Warwick Farm.”

The colt from Private Kiss (Lot 87) is out of a sister to flying filly Paprika (QTC McDougall Stakes LR).  And the dam has already produced two winners by Star Turn’s sire Star Witness.

“He’s quick off the mark in everything he does,” Connolly said.  “He’s efficient and relishes his work before getting straight back to the feed-bin.” 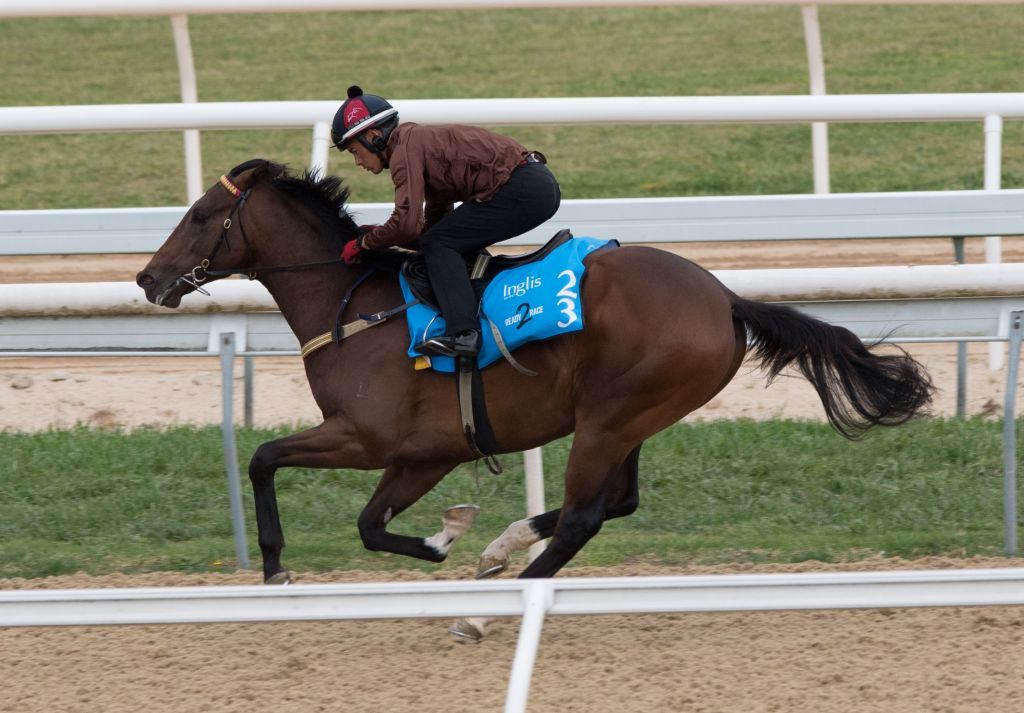