Lucky Story landed a Singapore hat-trick for Starcraft earlier this month and the Rosemont Stud sire was back in the Kranji winner’s circle with Olympic Anthem on Friday.

Standing at a fee of $9,900 (inc gst), Starcraft is arguably one of the best-value stallions in Victoria. He’s a multiple Group 1 winner and Group 1 sire whose yearlings have sold up to $650,000.

Olympic Anthem had won 3 races from 10 starts in Queensland before relocating late last year.  “This horse has loads of ability but can be his own worst enemy when things don’t pan out his way,” trainer Michael Freedman conceded.  “He’s got a good finish, which he showed tonight.”

Winning jockey Michael Rodd echoed Freedman’s assessment after the gelding made it 3 wins in 7 Singapore sprints on Friday.   “I always head out with plenty of confidence but whether he behaves himself is another story.  He was on best behaviour tonight and, once I set him alight in the straight, he was just too good for them.”

Olympic Anthem (5g Starcraft – Fire Song by Senor Pete) races for the China Horse Club and is the second foal of a Group 2 Sapphire Stakes winner at Randwick.  It’s the family of Zacroona who won the 2007 Carbine Club Stakes at Flemington for Pinecliff Racing’s Jonathon Munz.

Starcraft weighed in with another off-shore winner last Sunday when Blizzard scored first-up at Sha Tin.  He has won 4 times in 8 starts since transferring to trainer Ricky Yiu in Hong Kong. 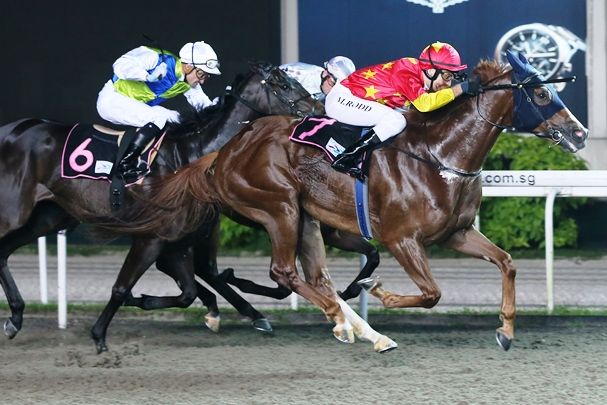