Step Aside stepped up to 1400m for the first time to break his duck in the McGrath Plate at the Sunshine Coast on Saturday.

A lightly-raced son of Pluck (USA), he sprinted to a clear lead in the straight and kept lifting under Dan Griffin in the final furlong.  The Rob Heathcote-trained 3yo was specked from $15 into $10 following encouraging efforts over shorter trips at Corbould Park earlier this month.

“Dan rode Step Aside perfectly,” stable rep Mel Sharpe said.  “He’s been looking for 1400m and will get further.  The Plucks are better given time and it’s great to win for Wayne Johnstone who has been a strong supporter for many years.”

Step Aside (3g Pluck – Nova by Exceed And Excel) is the first winner from an unraced daughter of Godolphin mare Astronomia (King’s Best) who bowed out of Australian racing with a fourth to Serenade Rose in the 2005 Victorian Oaks Gr.1.

Pluck’s widely-travelled stayer Mongolian Wolf is typical of the breed.  He’s a first-crop son of the Vinery sire and was a last-to-first winner of the Light Horse Brigade Hcp (2200m) at the Gold Coast on Friday.

Mongolian Wolf (6g Pluck – Oomaroo by Tale of the Cat) was Group 2 placed in New Zealand before arriving in Australia to win the 2017 Frank Packer Plate Gr.3 at Randwick.  The Anzac Day victory improved his record to 7 wins and prizemoney of $337,500 for syndicate managed by Australian Bloodstock.

“He’s as tough as nails and that was a gutsy win,” Australian Bloodstock’s Luke Murrell said.  “He always tries 100% and is all the better for a fast speed so he can get over the top late.”

Pluck (More Than Ready) has Star Boy back in action this week heading towards the Ramornie Hcp LR at Grafton in July.  He has been nominated for the $160,000 Wagga Town Plate (1200m) on Thursday. 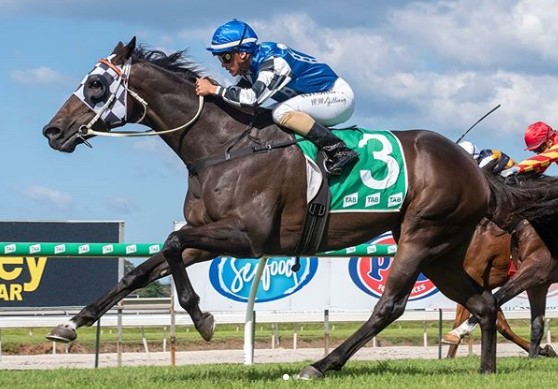