Spokesman (Press Statement) won at Warwick Farm on Easter Monday and Saffiano (More Than Ready) added his name to the list of winter carnival hopefuls in the Clarendon Stakes (1400m) at Rosehill on Saturday.

Waller has won J J Atkins Stakes with Pressday (2010), Press Statement (2015) and The Autumn Sun (2018).  This year’s edition of Queensland’s premier juvenile event is scheduled for June 6 at Eagle Farm.

Saffiano (2c More Than Ready – Black Prada by Domesday) had paraded like a potential Group 1 winner when selling to Aquis Farm for $600,000 at the Gold Coast Magic Millions.  He was the most expensive yearling by the Vinery legend in 2019 and his dam is an unraced half-sister to multiple Group 1 winning mare Appearance.

“The fact he’s by More Than Ready speaks for itself and our team really liked him,” Aquis Farm general manager Shane McGrath said.  “He vetted perfectly and we were happy to get him at that price because we were right at our maximum.”

Saffiano was one of two More Than Ready colts that Aquis Farm sent to Walter from the Gold Coast.  The other was Global Quest who won the Breeders’ Plate Gr.3 at Randwick last October.

Whereas Global Quest was a jump-and-run colt, Saffiano required more patience.  He appreciated the extra 300m second time out on Anzac Day and lived up to his looks to defeat Formentera (I Am Invincible) by a head.

“He’s a promising horse this one and we’ve taken our time,” Waller said.  “Even today he was a little bit wobbly up the straight.  He had to be good to pick up them up and once he did get in the clear he quickened really well.

“The status of the J J Atkins and its prizemoney are obviously good reasons to head north.  And the warmer climate up there seems to be a good springboard into a spring campaign.” 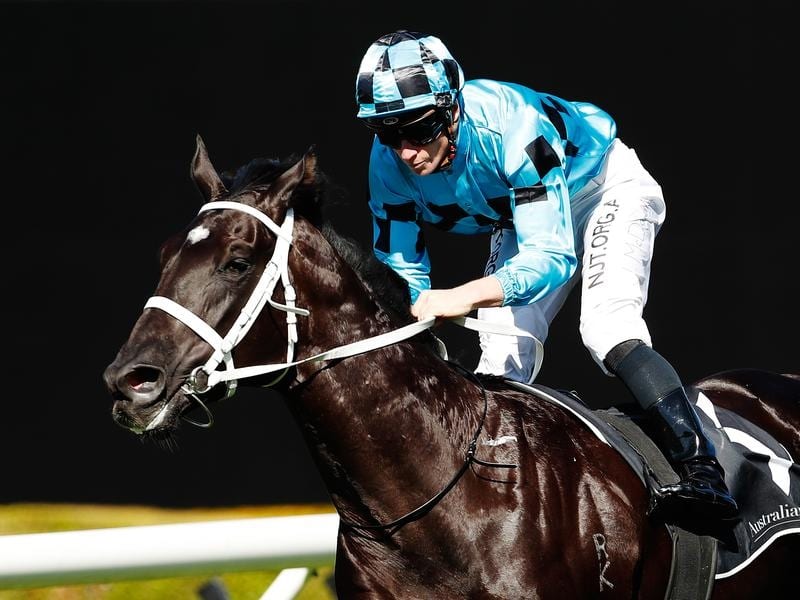