Okay To Pay claimed a third win in her last four starts at Stony Creek on Boxing Day and she made it with minutes to spare before the holiday meeting was abandoned.

After returning to scale, Race 4 jockeys deemed conditions unsafe and stewards confirmed horses had ‘faulted’ approaching the furlong marker where a section was significantly softer than the rest of the track.

The winner skirted the inside rail and wasn’t affected during the concluding stages of the O’Connell Motors Foster Hcp (1100m).  “She jumped beautifully like always and I knew the horse underneath me,” apprentice Sheridan Clarke said.  “I was confident around the turn and she did the rest.”

Okay To Pay had won at Cranbourne and Ballarat before December victories at Warrnambool and Stony Creek improved her record to four wins in seven starts for Aqua Thoroughbreds owner Tom Curnow.

“She’s going super and is a professional at home,” trainer Phillip Stokes said.  “Sheridan rated her beautifully in front today.  She’s a winner and we will lift the bar again and progress to a midweek race in town.

“Tom breeds from his mares and this one has a future.”

Okay To Pay is a 4yo half-sister to Yarradale-bred winners Frosty Grey (Frost Giant), Metro Boy (City Place) and One Off The Wood (War Chant).  The most recent foal from Born Princess is 2yo Gingerbread Man filly Born And Bread who won a Belmont trial for trainer Kieran McDonagh on December 6.

Gingerbread Man (Shamardal) has two colts from Yarradale catalogued for the Perth Magic Millions in February.  Lot 226 is a half-brother to Rhys Radford’s recent Northam winner Twice Lucky (Bradbury’s Luck) and Lot 301 is a full-brother to unraced 2yo Berbere.  He was a $33,000 purchase for Ian O’Connor at the 2021 Perth Magic Millions. 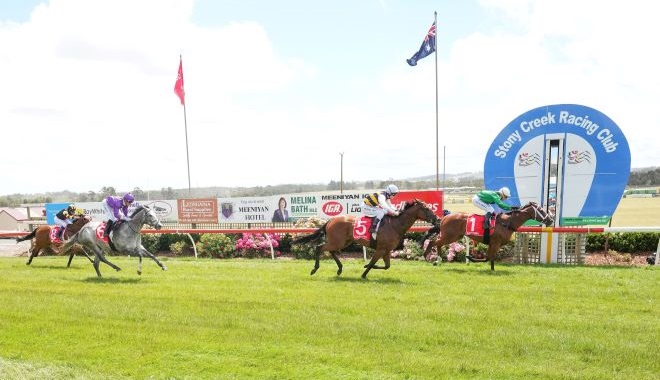