Equiano colt Strath Burn confirmed his Group 1 credentials with a photo-finish second to Twilight Son in the G1 Sprint Cup (1200m) at Haydock Park on Saturday.

The three year-old son of Swettenham Stud’s top-class shuttler motored home to be denied a short-head in a thrilling renewal of the time-honoured event.  The winner needed the line to come in time as Strath Burn swooped down the centre of the track.

Trainer Charlie Hills was both delighted and disappointed with the result.  “I’m very proud because the draw wasn’t ideal and he’s done well to get as close as he did.  I’ve always loved him and he will only get better.  It’s very exciting for next year.”

In the meantime, Strath Burn will be given an opportunity to end Twilight Son’s unbeaten record in the G1 British Champions Sprint (1200m) at Ascot on October 17.

Strath Burn (3c Equiano – Irish Light by Irish River) is raced by Qatar Racing’s Sheikh Fahad with Meikle Ben Stables and was coming off a Group 3 victory in the Hackwood Stakes at Newbury.  He had been runner-up in the G2 Prix Robert Papin at Maisons-Laffitte at two.

Hills has stellar battalion being aimed at the British Champions Sprint headed by his G1 July Cup hero Muhaarar.  Strath Burn and Stewards Cup winner Magical Memories, who was third home behind her stablemate at Haydock on Saturday, are also prominent in ante-post markets. 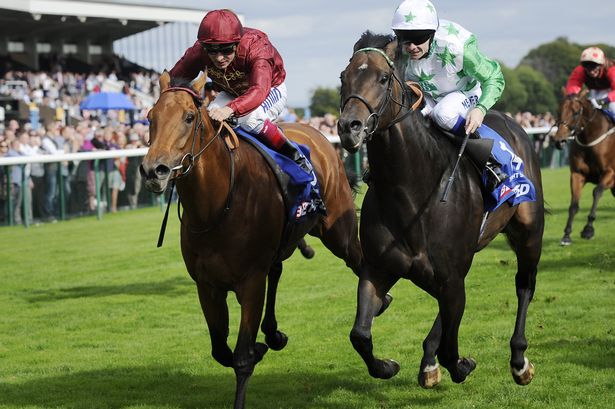