Suman Hedge has marked his admission to Federation of Bloodstock Agents Australia with a spend of $892,000 at the Magic Millions National Foal Sale this week.

Topping Hedge’s seven buys was the So You Think – Third Degree colt (Lot 572) that made $250,000 from the Telemon Thoroughbreds draft on Friday.  He’s a three-quarter brother to last year’s G1 Rosehill Guineas winner D’Argento.

“We’re thrilled to purchase this stunning colt,” Hedge said.  “We identified him as one of the stand-out offerings at the Magic Millions and he heads to Milburn Creek.”

Group 1 Bloodstock’s Matt Becker and Merricks Station equalled top-price on the FBAA leader-board with $250,000 for the Not a Single Doubt – Ihtsatune filly (Lot 222).  She was sold by Blue Gum Farm acting for WA breeder Neville Duncan and is from a sister to his G1 Kingston Town Classic winner Ihtsahymn.

A couple of hours later, Astute graduate Witchfulthinking (War Chant) was a very impressive 2yo maiden winner on debut at Wangaratta.  The Andrew Noblet-trained filly had been bought for $120,000 at the 2018 Perth Magic Millions Yearling Sale.

Belmont Bloodstock’s Damon Gabbedy bought a half-dozen foals highlighted by the Divine Prophet – Shippo filly (Lot 502) that cost $160,000 from Rothwell Park.  Her dam was a four-time winner around the NSW provincials and is a half-sister to Mecir (G3 Newcastle Newmarket).

Newgate Farm (as agent) sold a first-crop filly by its G1 Blue Diamond winner Extreme Choice to Duncan Ramage (DGR Thoroughbred Services) for $60,000.  Catalogued as Lot 137, she is from the Lomar Park family of Group 1 sprinter Super Elegant.

Bluegrass Bloodstock’s Lenny Russo and JR Thorougbreds pin-hooker Jeremy Ruz outlaid $130,000 for a Dundeel colt (Lot 16) and a Nicconi filly (Lot 48).  The latter is from a half-sister to Group 2 winner Stryker.

Mitchell Bloodstock averaged over $121,000 for their quartet by Brazen Beau, Capitalist, Extreme Choice and Lonhro.  The Brazen Beau filly (Lot 328) from Edinburgh Park is closely related to Lady Jivago (RL Inglis 2YO Classic).

Pinhook Bloodstock’s Dave Mee purchased a pair of $75,000 colts by first-crop sires Shalaa (Lot 3) and Maurice (Lot 436) among four buys on the Gold Coast.  He got in early for the first to parade by Shalaa (Ire), a Group 1 winner at two in England & France, who shuttles to Arrowfield Stud.

Randwick Bloodstock weighed in with $313,000 for five foals topped by the Pride of Dubai – Nagoya filly (Lot 366) that was knocked down for $135,000.  RBA’s Brett Howard and Ravenswood Bloodstock pin-pointed the half-sister to Aichi (G3 Danehill Stakes) and Kinshachi (LR Nudgee Hcp) during the middle session on Thursday.

Sheamus Mills Bloodstock locked in three lots on Thursday including a $190,000 Capitalist filly out of NZ stakes winner Mygoodgrace (Lot 365) and a $110,000 Astern filly from Parfaits (Lot 402).

Mills and his client Anthony Roberts are also on a winner after they bought Reward for Effort mare Valentine’s Reward for $115,000 with a positive to Zoustar at the 2018 Inglis Broodmare Sale.  That colt made $250,000 on Friday and the mare goes through the ring again as Lot 1668 with a positive to Sebring next Friday. 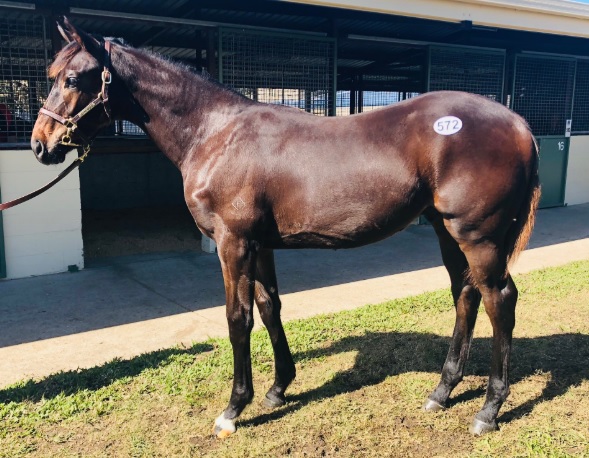 SO YOU THINK – THIRD DEGREE COLT