Amelia Park’s success in the sale-ring continued at Oaklands this week when its Snitzel – Amelia’s la Bout filly made $475,000 to the bid of trainer Clinton McDonald.

WA-based Amelia Park owner Peter Walsh sold her through the Segenhoe Thoroughbreds consignment as Lot 353 on Monday and she topped McDonald’s shopping list of nine yearlings at the Inglis Melbourne Premier Sale.

Walsh had purchased her dam Amelia’s la Bout (Hinchinbrook) for $280,000 at the 2017 Inglis Easter Yearling Sale.  She was a brilliant debut winner at Ascot but badly lacerated a fetlock while spelling and that called time on her career after just the one start.

“We received information from Perth that the dam was pretty good but obviously didn’t reach her full potential,” McDonald said.  “Her Snitzel filly looks an athlete.  She will be given every opportunity – perhaps as an autumn two year-old.  She didn’t turn a hair during the parades and I was happy to buy her off Segenhoe.  It’s a great farm.”

The $475,000 price-tag was the most expensive for a filly by the end of Day 2 at Oaklands and was only bettered by an I Am Invincible ($550,000) from Silverdale Farm on Day 3.  McDonald bought her for long-time client Dom Romanelli.  “We were probably out of gas at $400,000 but went beyond our budget.  Dom and I have had a lot of luck buying fillies and I really wanted her.”

Last week at the Perth Magic Millions, Amelia Park topped the fillies leader-board with a daughter of boom sire Russian Revolution (Lot 29) that made $320,000 to Mark Pilkington Management.  Her dam Samovare (Savabeel) was a Group 3 winner in Perth and Group 2 placed at Moonee Valley.

“I loved everything about her except the price,” Pilkington said after confirming Seymour Bloodstock’s Darren Thomas will be managing part-owner.  “She came well recommended in the west and a lot of people have contacted me to buy in.  She’s BOBS eligible so we could send her to Sydney.”

Pilkington outlasted local trainer Simon Miller who has been spruiking his unraced 2yo filly Amelia’s Jewel as a potential Stakes-winner this season.  On the strength of an untouched trial win over 950m at Lark Hill on February 21, the Siyouni (Fr) filly was installed a $6 favourite by the WA TAB for the G2 Karrakatta Plate (1200m) at Ascot on April 2.

Amelia’s Jewel will make her eagerly-anticipated debut against a smart field in the LR Supremacy Stakes (1000m) at Ascot this Saturday.  “I’m looking forward to watching her shine,” Miller said.  “She’s a ripper.  From the get-go she’s always had an engine and it was no surprise to see her school up that way in the trial.

“If I can put some black-type on her early, I don’t know what she would be worth.”

Walsh sent her to Haras de Bonneval in Normandy where Siyouni  was standing for 75,000 euros.  Several French titles later, he is now priced at 140,000 euros.

Bumbasina’s first Australian foal, an Amelia-consigned colt by Merchant Navy, topped Day 2 in Perth last week when knocked down to Wally Daly for $160,000.

Le Metayer also purchased Bound Copy (Street Cry) for 45,000gns as agent for Amelia Park at the 2018 Tattersalls July Sale.  She arrived here carrying a Kingman (GB) colt conceived at Juddmonte Farm and he made $600,000 when offered by Segenhoe (as agent) at the 2121 Inglis Australian Easter Yearling Sale.

Named Zurich, he’s with Richard and Michael Freedman at Randwick.  “He’s been in and out of work a couple of times and has been spelling for the last month,” stable manager Sophie Johnson reports.  “He’s a big boy and is still growing.”

Bound Copy is a daughter of In A Bound (Ashkalani) who won a G2 Queen of the Turf Stakes at Rosehill for Gai Waterhouse before being exported to England in 2007.  Her dam Bounding Away (Biscay) was Australia’s Champion 2YO in 1986 for owner-breeder Tommy Smith.

Segenhoe (as agent) has a So You Think – Bound Copy (USA) colt catalogued as Lot 80 for Amelia Park at the Inglis Easter Yearling Sale on Tuesday, April 5. 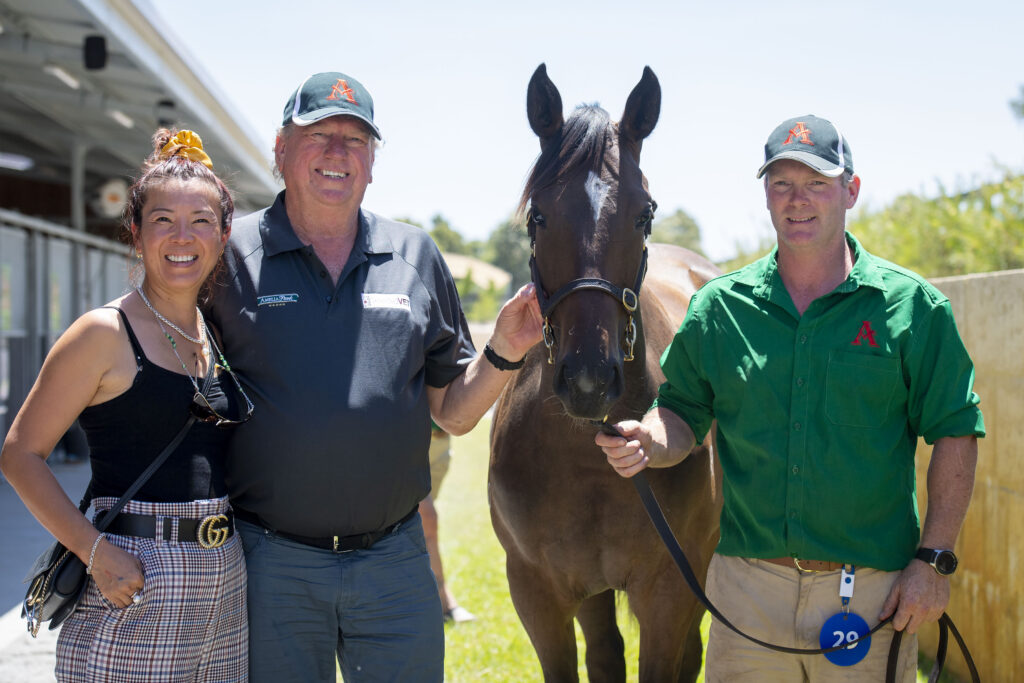