Ducimus has his first crop with all the right trainers and that will count when the 2yo season gets serious in 2022-23.

They’re built to be early winners and have all the right credentials being by a Flemington 2yo Stakes winning son of super-sire Snitzel.  Ducimus was prepared by Team Hawkes for Orbis Bloodstock who stand him in the south-west at Stratham with Rivercrest Park’s Steve Hoare.

His first yearlings sold to $80,000 at the Perth Magic Millions and among trainers signing up were Simon Miller, Luke Fernie, Todd Harvey, David Harrison, Colin Webster, Ash Maley, Michael Lane and Sharon Miller.  “First and foremost, they’re athletes,” Hoare said.  “They’re going to be forward and that precocity made them popular with trainers.  All the scopes and x-rays were clean, too.”

Hoare supervised the preps of his Ducimus yearlings before selling them through the Alwyn Park consignment in the Swan Valley.  Simon Miller paid top-dollar for the gelding from Many Secrets (Lot 329) and he bought another gelding out of Pretty Cingin (Lot 14).

“I’ve been impressed with the Ducimus stock on the farms,” Miller said.  “He keeps throwing types and traditionally when you throw types, you will end up being a reasonable bull.  I had to pay a bit for the Many Secrets and was really happy to do so. This bloke looks like a running type. I wouldn’t be surprised if he gets up and going early.

“I was keen to secure the Pretty Cingin.  He’s out of a really good WA family and is also a late foal, so his upside is enormous.”

Hoare confirmed no-one was put off knowing they had already been gelded.  “It’s saves time and money and, to be fair, Perth trainers are bidding to buy city winners.  They’re not dreaming about stud careers.”

The Ducimus – Shezapro (Lot 35) purchased by Luke Fernie has a good overstep which is typical of the breed.  So is his strong shoulder and deep girth.  That also attracted Colin Webster who liked what he saw when the gelding from Magnificent Pair (Lot 328) paraded inside the sales arena.

Gervase Park’s Chris Gales has supported Ducimus since his arrival in WA and he sold two colts to Ash Maley topped by the bay from Swimmer (Lot 227).  “He’s a standout and has got it all together,” Hoare added.  “A lovely walker with a good eye and he’s looks readymade.”

Apart from his Swan Valley graduates, Ducimus has several more youngsters starting their educations including the first foal from Inimitable (Lonhro) who was purchased by Orbis Bloodstock from Oakland Park.  Inimitable, like Many Secrets, descends from champion matron Most Secret (Bletchley Park).  There are a half-dozen Stakes winners under her name on the pedigree page including Oakland Park’s Group 1 mare Covertly.

“She was on the small side but has since fashioned into a leggy filly with plenty of rein,” Hoare reported.  “It’s an improving international family so a winning record will improve her residual value.”

The Ducimus half-brother to G3 R J Peters Stakes winner Freo (Izmir) is also being broken-in at Rivercrest Park.  And up at Serpentine, Alwyn Park’s John Andrew has a Ducimus colt on the ground who is a half-brother to LR Starstruck Classic winner Snowchino. 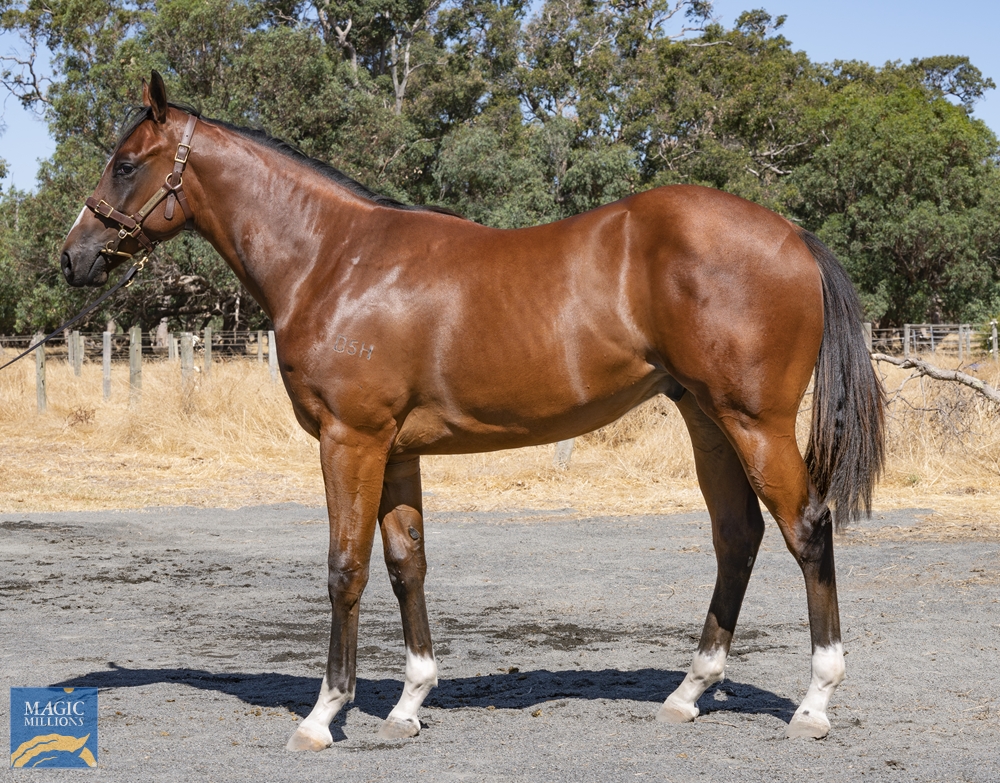 DUCIMUS – MANY SECRETS
“Looks like a running type. I wouldn’t be surprised if he gets up and going early.”