Weregoingtogetcha took the first step towards the Group 1 NZ Derby with a last-to-first victory at Awapuni on Saturday.

The Testa Rossa colt stormed down the outside to win the Rich Hill Stud Hcp (1400m) by more than two lengths under Kelly Myers.  “He relaxed beautifully and is definitely a Derby type,” Myers said.  “He has a super turn of foot.”

Weregoingtogetcha (3c Testa Rossa – Sweetness ‘n Light by Entrepreneur) is trained by David Hayes and is part-owned by his Woodville neighbour Stephen Prenter.  The colt cost $140,000 at the 2012 NZB Premier Sale at Karaka and is from a half-sister to G2 Qld Winter Stakes winner La Sizeranne (Stravinsky).

Second-dam My Tricia (Zabeel) is a sister to champion colt Grosvenor who was a Group 1 winner of the Caulfield Guineas – Victorian Derby double in 1982.

“I was confident he would acquit himself well today,” Hayes admitted.  “It was his first start back here since finishing second in the Listed Ryder Stakes in July.  It’s on to the Derby now.”

Weregoingtogetcha’s spring campaign was delayed due to a sprained fetlock.  He was unplaced in the G1 NZ 2000 Guineas last month but Hayes said he was ridden upside down outside the leaders at Riccarton.

The New Zealand result underscored Testa Rossa’s ability as an all-purpose sire.  On Thursday, his brilliant colt Unencumbered captured the Wyong Magic Millions on the way to the $2 Magic Millions 2YO Classic on January 11. 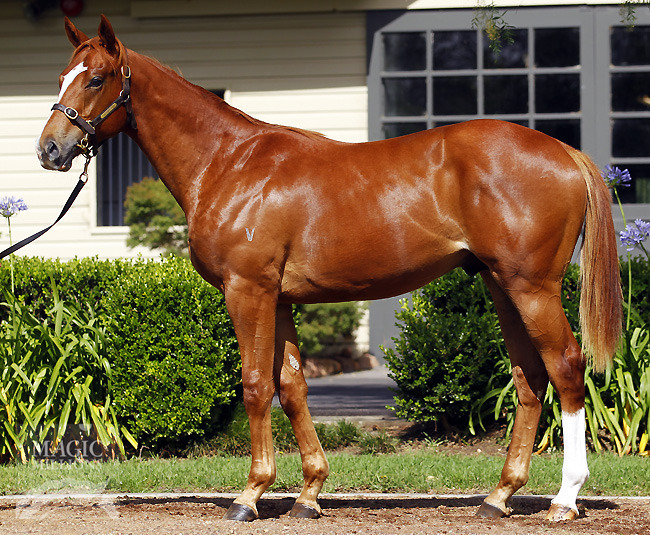