Press Statement’s positive start to the season can go to another level during the Sydney spring carnival with his promising last-start winners Toomuchtobear and Notions.

The Vinery sire’s ability to get a good galloper wasn’t lost on Chris Waller after Toomuchtobear scored a narrow victory in the $130,000 Bowermans Furniture Hcp (2000m) at Kembla Grange on Saturday.

He led home a Waller trifecta from Our Intrigue (Showcasing) and Yiyi (No Nay Never) in recording a third win in four starts since July.  “This horse is going places,” the champion trainer predicted.  “He was rated well by Jason (Collett) and overall it was a well-judged ride.”

Waller prepared Press Statement to Group 1 victories in the J J Atkins Stakes and Caulfield Guineas and Toomuchtobear is one of the stable’s numerous nominations for the $7.5million Golden Eagle (1500m) at Rosehill on October 30.

A $120,000 buy at the 2019 NZB Karaka Yearling Sale, he is raced by a syndicate that includes leading owners Nev Greenhalgh and Peter Tighe who managed Waller’s world champion Winx.

Press Statement 3yo Notions stamped herself as a filly of the future with a powerful finish to win the HRC Motel Hcp (1600m) at Hawkesbury on Thursday.  “I was really happy with her today,” jockey Rachel King said.  “She’s still a bit new and took a while to flatten out but actually went to the line really nicely.

“That will give her a good bit of confidence and she will keep going on from here.”

A day beforehand, her older half-sister to Sirileo Miss had won at first-up at Sandown Hillside.  She had been placed in the Auraria Stakes Gr.3 at Morphettville in April.

Trainers Richard & Michael Freedman have black-type plans of their own for Notions with consideration being given to a start in the Gloaming Stakes (Gr.3, 1800m) on September 25.

Press Statement’s Melbourne-based 3yo Daily Bugle continued his spring prep on Saturday with an even fifth in the Exford Plate (LR, 1400m) at Flemington.  He was a powerful winner of the Mornington Sires’ Produce Stakes (1500m) in April and remains on track for a Group 1 grand-final in the Caulfield Guineas (1600m) next month.

Press Statement has sired 8 individual winners this season to sit in fifth place on the third-season table behind equal leaders Headwater and Pride Of Dubai with 12 winners.

He added another off-shore strike on Sunday when Steel Win scored a fighting victory in Hong Kong on Sunday.  He had signed off last season with a similar victory over 1200m at Sha Tin.  “He has improved from a three year-old to four and luck was on my side today,” trainer Michael Chang admitted.  “Joao (Moreira) took the box seat and saved ground and some energy.” 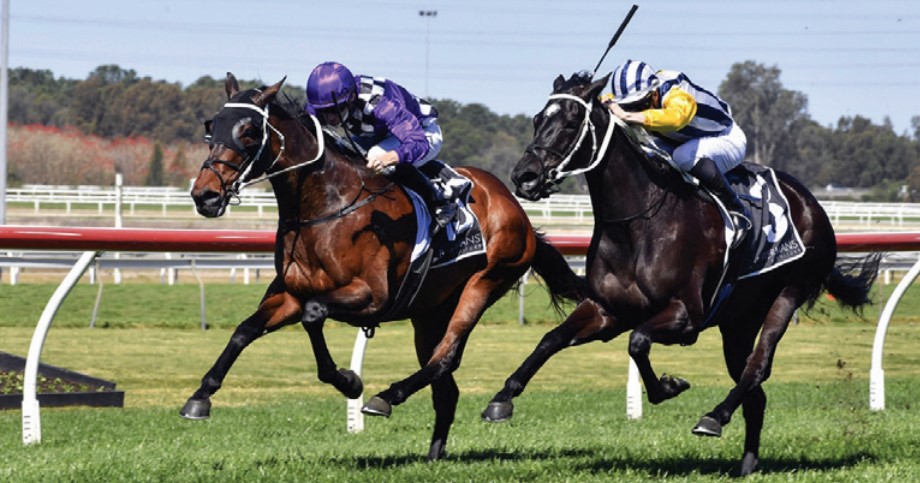