Swettenham Stud has joined forces with one of the world’s most influential and successful Qatari racing organisations Al Shaqab, to bring the European Champion 3yo Miler Toronado to stand in Victoria.

“To be standing Toronado, who champion jockey Richard Hughes regarded as ‘the best he’d ever ridden’ is fantastic and Swettenham is immensely proud to be entrusted with him and are grateful for the vision of his advisers, in particular John Warren.

“This is a great opportunity for Victorian breeders to use the fastest son of the brilliant High Chaparral, who is emerging as a major influence.  One of the biggest attractions for breeders is his compatibility with Danzig line mares that are so well represented in Australia.”

John Warren says, “Toronado is a magnificent correct individual with tremendous muscle definition which is why he was such a fast horse. He is the fastest and most precocious son of High Chaparral and his 2yo winning dam is by the brilliantly fast dual Group I winning 2yo Grand Slam (Gone West). He looks the perfect horse for Australia with the combination of his pedigree, powerful physique and high class performances. I know the breeders will be very impressed when inspecting him when he arrives in Australia, as he has been hugely popular here in the UK.”

Toronado was unbeaten as a 2yo and won his first race in early June over 1300m before winning the prestigious Winkworth Stakes (1400m) at Ascot in July. He then went on to win the Group II Champagne Stakes (1400m) at Doncaster which positioned him as one of the most exciting 2yo’s of his generation.

He was crowned European Champion Miler at three and was the co-highest rated miler of his age in the world with an international rating of 125.

His four-length, all-the-way win in the Group III Craven Stakes (1600m) at Newmarket had trainer Richard Hannon describing him as “a machine who just quickened and quickened”.

Having been bumped in the race, he was then unluckily beaten by a nose in the Group I St. James’s Palace Stakes (1600m) at Royal Ascot by the Champion 2yo Dawn Approach, but subsequently reversed the form when storming home to victory in Goodwood’s Group I Sussex Stakes (1600m) winning the race in a phenomenal time which was more than a second faster than Frankel recorded, in both of his victories in the same race.

Toronado returned as a 4yo with a brilliant performance to win the Group I Queen Anne Stakes (1600m) at Royal Ascot, again recording a time faster than the mighty Frankel.

Champion Jockey Richard Hughes told reporters after the race, “I haven’t gone as fast at Ascot in my life over a mile, we we’re going a five or six furlong pace!”

Champion Trainer Richard Hannon also announced, “He looked so well he was like superman, and that’s what he’s like. He almost looks superhuman.”

Toronado stood his first season at the English National Stud and was supported strongly by Al Shaqab and many top breeders in the UK, France and Ireland. 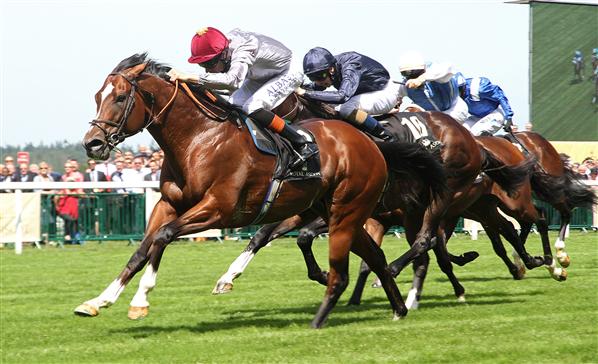